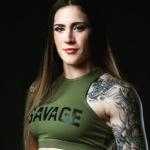 Megan Anderson is an Australian mixed martial artist who fights in the Ultimate Fighting Championship (UFC). She is the former Invicta FC Featherweight champion, won in 2017. She has earned Purple belt in Brazilian Jiu-Jitsu. She has 9 wins and 3 losses till date.

Megan Anderson, after defeating Cat Zingano, says she's ready to fight her again to prove herself. She defeated Cat Zingano at UFC 232 on 29 December 2018 via technical knockout after her kick landed on Zingano's face making an eye injury Zingano. After the injury, Zingano could not continue and Anderson was announced the winner. After the fight, Anderson said, "A win is a win". She stated she was disappointed that she could not showcase her offensive and defensive wrestling. She also said it was not a clean win and is ready to fight her again to prove herself.

Megan Anderson was born on 11 February in 1990. She was born in Gold Coast, Queensland in Australia. She holds Australian nationality. Information about her parents and siblings are currently unavailable. Her zodiac sign is Aquarius.

She attended All Saints Anglican School. After graduating from high school, she moved to Canberra to join the Australian Army. She was discharged from military after serving for two and half years.

After the military, she worked as a receptionist in the Gold Coast.

She began training at the local boxing scene.

She made her professional MMA debut in November 2013 against Zoie Shreiweis. She lost her debut fight.

She signed with Invicta Fighting Championships and made her debut against Cindy Dandois in September 2015. She lost by submission (triangle choke).

She became the Interim Invicta FC Featherweight Champion after she defeated Charmaine Tweet in January 2017. She won by TKO in the second round.

She was later promoted to undisputed Featherweight Champion.

She faced Cat Zingano on 29 December 2018 at UFC 232. She defeated Zingano via technical knockout early in the first round after her kick caused an eye injury to Zingano that didn't allow Zingano to continue.

She has appeared as Team Green in the 2018 Heroes and Superstars.

No news regarding her relationship has come to light yet. She is reportedly single. She has maintained her personal life private.

She has several tattoos on her body. She currently lives in Lee's Summit, Kansas City, MO in the United States.

Net Worth of Megan Anderson

The net worth of Megan Anderson is under review. She signed with UFC in 2017. Her main source of income comes from fighting.