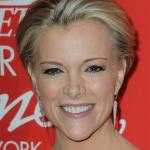 A lady who is blessed with an attractive face and true talent, Megyn Marie Kelly simply known as “Megyn Kelly” is a popular American journalist, news pundit, and political commentator. Kelly is best recognized for hosting the weekday evening show called ‘The Kelly File’. She gained a lot of popularity and fame working for Fox News from the year 2004 to 2017.

An alluring television journalist, Megyn Kelly landed on this earth on 18th November 1970 in Syracuse, New York, United States of America. Megyn holds an American nationality. She belongs to mixed ethnical background Italian and Irish as her mother was Italian and father was Irish.

Regarding her education, she initially joined ‘Tecumseh Elementary School’ based in New York but later attended ‘Bethlehem Central High School’ after moving down to Albany. Kelly earned University degree studying at ‘Syracuse University’ where she majored in political science. In the year 1995, she received J.D. studying at ‘Albany Law School’.

Megyn Kelly is really an attractive figure of American television broadcasting world. She has been successful to attract all the audiences toward her shows. Her glorious figure and magnificent personality have earned her a number of fans. As of 2016, she has the libidinous hourglass shaped body measurements size of 35-25-36 inches. She wears the bra cup size of 32C. The mesmerizing lady stands with a height of 5 feet 6 inches and carries a normal weight size of 59 kg.

Salary and Net worth of Kelly

At the start of 2016, Megyn Kelly has accumulated total net worth amount of $15 million dollars. Kelly has been successful to prove herself as one of the talented television journalists of American journalism world. She might be earning a handsome amount of salary at the present time about which she has opened up in public. She is satisfied with her earning. Her salary has not been revealed yet and will be updated soon.

Moving towards her personal life, the gorgeous television personality married twice in life. Kelly married first with an anesthesiologist named Daniel Kendall on 29th September 2001. After spending the joyful moment for five years, they ended their relationship with divorce in 2006. Megyn later tied the knot in the marital relationship with the President and CEO of Authentium named Douglas Brunt on 1st March 2008. From getting married to hubby Douglas, she is blessed with three children. Presently, the couple is living a happy life together and there is no any sign of separation between them.

Achievement and Contributions of Kelly

Megyn Kelly has achieved both fame and rewards from her broadcasting career. Megyn was listed as one of 100 most influential people by the Time magazine in 2014. For more news and recent updates, her fans can follow her on twitter account @megynkelly.

Trivias About Megyn Kelly You Need To Know.