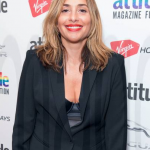 Melanie Blatt is a British singer as well as an actor who came to prominence in 1997 as a member of the girl group "All Saints". The group has gained five number one singles, two multi-platinum albums, two BRIT Awards, and has sold over 10 million records worldwide, making them one of the best-selling girl groups of all time, and the second best-selling girl group in the UK. After the band broke up, she began her solo career. She began recording a solo album in 2003, working with numerous producers including Xenomania, and released her debut solo single "Do Me Wrong" in 2003. In the year 2005, she made a return to music with her single "See Me", and began recording another album independently which was later shelved and canceled in favor of the All Saints reunion. In 2013 and 2015, she was a judge on the television series The X Factor NZ. In 2000, she appeared in the film "Honest" directed by Dave Stewart opposite Nicole and Natalie Appleton, and in 2001 she played a small role in the independent British film "Dog Eat Dog".

What is Melanie Blatt Famous For?

What is Melanie Blatt's Ethnicity?

Melanie Blatt took birth on 25 March 1975. Her born name is Melanie Ruth Blatt. She is from Camden, London, England. She was brought up in both the UK and France. She is British by nationality and her ethnicity is Mixed. She celebrated her 47th birthday as of 2022. She has a French mother, Helene Blatt, and a British father, David Blatt (known also as the author of the book Manchester United Ruined My Wife), whose ancestors were from Poland and Russia, and a younger sister named Jasmine. She went to Fitzjohn's Primary School. In 1986, she attended the Sylvia Young Theatre School where she met Nicole Appleton who became her best friend. She also played young Eponine in "Les Misérables" for six months, and was the understudy for Cosette together with fellow Sylvia Young student Denise van Outen.

What is Melanie Blatt's Net Worth?

Melanie Blatt is a successful singer who has released several songs and albums during her career timeline being a member of the girl group All Saints as well as working as a solo. The net worth of Melanie Blatt is estimated to have $10 Million as of 2022. Her main source of wealth comes from the music industry but she also makes a cool amount of money appearing in movies and shows. She is living a lavish lifestyle at present.

Who is Melanie Blatt's Husband?

Melanie Blatt was a married woman. She previously tied the knot to her husband, Stuart Zender, Jamiroquai's former bass player. She gave birth to their beautiful daughter Lilyella on 20th November 1998. They broke up in early 2006. Today, she is living a single life happily with her daughter. Her sexual orientation is straight.

How tall is Melanie Blatt?

Melanie Blatt is a beautiful singer with a slim body build. She has a tall standing height of 1.60 m or 5 feet 2 inches. Her exact body weight along with her body size is still to get disclosed yet. She has blonde hair and her eye color is brown. In 1986, Blatt was diagnosed as having scoliosis. Since her parents were not satisfied with the treatment for the condition in the United Kingdom they decided to move to France, where a specialist inserted three metal rods in her back.