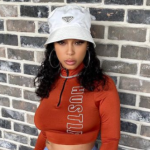 Janae Gagnier, excellently known as Mercedes Morr was an American social media influencer who was widely known for her @missmercedesmorr Instagram account where she had gained more than 2.6m followers with 163 posts. She garnered popularity there for her modeling photos, as well as those documenting her everyday life. Morr published her first photo on Instagram on 15th April 2014. She usually shared her bold pictures with her followers. She also mentioned that she was M&M sweet like a candy cane and was best known for her personality and bold pictures. Likewise, Mercedes had a huge fan following on her social media profile including Twitter where she has gained over 8.5K followers. Sadly, we lost her at the age of 33.

Mercedes Morr was found dead Sunday in Richmond, Texas, in what is suspected to be a murder-suicide. She was 33. Gagnier, with more than 2.6 million followers on Instagram, was found dead at Cortland Apartments. A man's body was also at the scene, but he was not immediately identified. There was no known relationship between him and Gagnier, according to the Richmond Police Department. Police officers found the bodies after they responded to a welfare check at about 4 p.m. Sunday. The cause of death for both Gagnier and the man is pending autopsy results.

Mercedes Morr took birth on 26th November 1987 with the real name of Janae Gagnier in Houston, Texas, USA. She was American by nationality and African-American by ethnicity. Her religious belief was in the Christian religion and her race was black. Mercedes lastly celebrated her 33rd birthday back in 2020 and as per her birth date, her zodiac sign was Sagittarius. She was the daughter of her father, Mark Gagnier, and her mother, Jeanetta Grover.

Mercedes Morr was an unmarried lady. The model was currently focusing on her career as she had been recently gained fame and a major title. However, she might also be in a secret relationship, though, before revealing her relationship status she passed away. Talking about her sexual orientation, she was straight.

Mercedes Morr had a net worth of was $1million as of 2021 whereas she had also a handsome amount of salary which was also in thousands of dollars per year. She was among those few individuals that have such a wide range of experience and remains true to whatever she embarked on. Mercedes had not done any endorsement work yet as her major source of income was from her social media influencer career.

Mercedes Morr stood at an ideal height of 5 feet and 11 inches whereas her body weighed around 135 lbs. Her killer stilettos with short fabulous dresses showing off her envious long legs made her the object of desire among men belonging to any age. Her hair color was black and her eyes color was dark brown. She was slim by body build. In addition, Morr had done plastic surgery on her body parts as she had undergone buttocks, breast implants, and Lip Augmentation. She also did some implants to make the sure butt look big.

Trivias About Mercedes Morr You Need To Know.