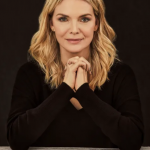 Michelle Marie Pfeiffer famed as Michelle Pfeiffer is an American actress and producer. She is one of the most talked actress of the 1980s and 1990s. Some of her notable work in the film industry includes Grease 2, Scarface, The Witches of Eastwick, Married to the Mob, Dangerous Liaisons, The Fabulous Baker Boys, Batman Returns, Wolf, Hairspray, Where is Kyra?, Ant-Man and the Wasp, Maleficent: Mistress of Evil and more. She first appeared as Suzie Q in the 1980 release "Hollywood Knights". However, this motion picture comedy movie was released earlier to "Falling in Love Again" (1980), which introduced Michelle Pfeiffer to films officially. Appearing in numerous movies and TV Shows, her awards included Golden Globe Award and a British Academy Film Award, as well as nominations for three Academy Awards and one Primetime Emmy Award. She is also considered a Hollywood sex symbol. In 2020, the Kenosha News voted Pfeiffer America's 26th favorite actress. On 21st January 2021, it was announced that she had been cast as Betty Ford in the upcoming Showtime television series, "The First Lady".

Michelle Pfeiffer will get strong competition in the year 2022, though, from Zoe Kravitz, who is playing Selina Kyle/Catwoman in Matt Reeves' The Batman alongside Robert Pattinson's Caped Crusader. As for Pfeiffer, even critics who found Batman Returns too dark hailed her performance, made even more thrilling by her use of a whip. Pfeiffer actually learned to wield the weapon, a skill she still has, having posted a video demonstrating her skills 27 years later. And a recently resurfaced behind-the-scenes video, posted on Twitter by Jarett Wieselman, reveals just how good her skills were while shooting Batman Returns. Shot by a crew member, the video shows Pfeiffer easily taking care of four mannequin heads with her whip, as Catwoman does in the movie, in one take. 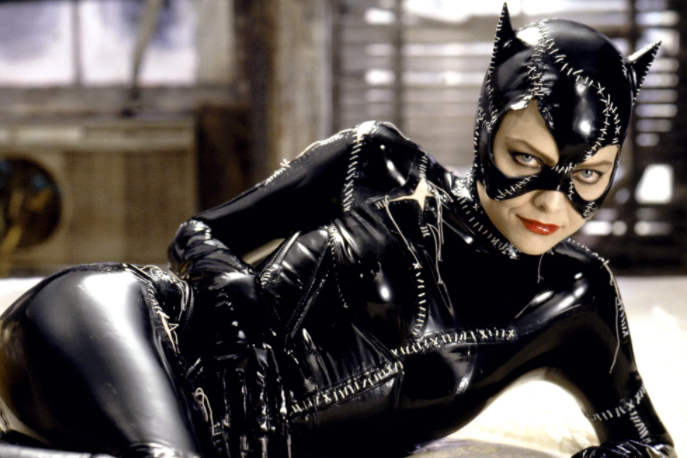 What is the Birthplace of Michelle Pfeiffer?

On 29th April 1958, Michelle Pfeiffer took birth in Santa Ana, California, the USA. Her birth name/full name is Michelle Marie Pfeiffer. She is American by nationality and her ethnicity is Mixed as she has German, English, Welsh, French, Irish, and Dutch ancestry from her paternal side, while she has Swiss-German and Swiss ancestry from the maternal side. She is known to be Protestant (religion) according to her heritage, but the actress does not voice her religion publicly. She, however, has admitted following a cult that affected her life at a younger age. Taurus is her Zodiac sign. She was born to her parents;  Richard Pfeiffer (Heating and air-conditioning contractor) (father) and Donna (née Taverna) (Housewife) (mother). She also has three siblings; Rick Pfeiffer (Older Brother), Dedee Pfeiffer (Younger Sister) (Television and Film Actress), Lori Pfeiffer (Younger Sister) (Actress).  She experienced her childhood in Midway City and attended Fountain Valley High School. She graduated from high school in 1976. Michelle worked right after her high school and simultaneously attended Golden West College. As of 2020, she celebrated her 62nd birthday and she will next be celebrating her 63rd birthday as of 2021.

How was the Career of Michelle Pfeiffer? 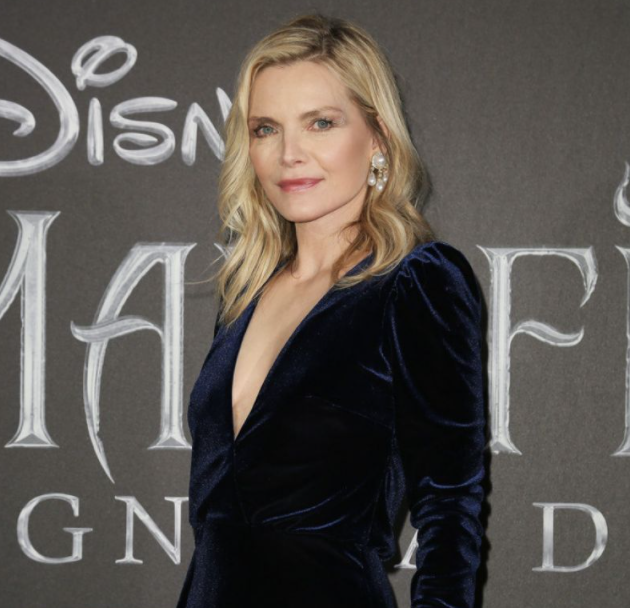 Michelle Pfeiffer is an award-winning actress who has accumulated many awards and has been nominated for numerous awards. During her career timeline, she achieved Golden Globe Award for Best Actress - Motion Picture Drama, the BAFTA Award for Best Actress in a Supporting Role, and Best Actress awards from the National Board of Review, the National Society of Film Critics, the New York Film Critics Circle, the Chicago Film Critics Association and the Los Angeles Film Critics Association, as well as Best Supporting Actress awards from the Kansas City Film Critics Circle and the San Diego Film Critics Society. What's more, she has also achieved three Academy Award nominations to date: Best Supporting Actress for Dangerous Liaisons (1988), and Best Actress in The Fabulous Baker Boys (1989), and Love Field (1992). She then received her first Emmy Award nomination for her performance in The Wizard of Lies (2017) portraying Ruth Madoff in the year 2017. On 11th December 2017, it was announced that she had received a 2018 Golden Globe Award for Best Supporting Actress-Series, Miniseries, or Television Film nomination for the role. With her success and hard work, she will achieve more awards in the future as well.

Who is Michelle Pfeiffer married to?

Michelle Pfeiffer is a married man. She is currently married to her handsome husband, David E. Kelley. By profession, her husband, David is a TV writer and producer. The duo met each other on a blind date in the year 1993. She entered into private adoption proceedings before she met Kelley. She then adopted a newborn daughter, Claudia Rose in March 1993 who was christened on Pfeiffer and Kelley's wedding day. She then gave birth to their son in the year 1994 whose name goes by John Henry Kelly II. As of today, the couple is enjoying their present life happily with their children. Her sexual orientation is straight. 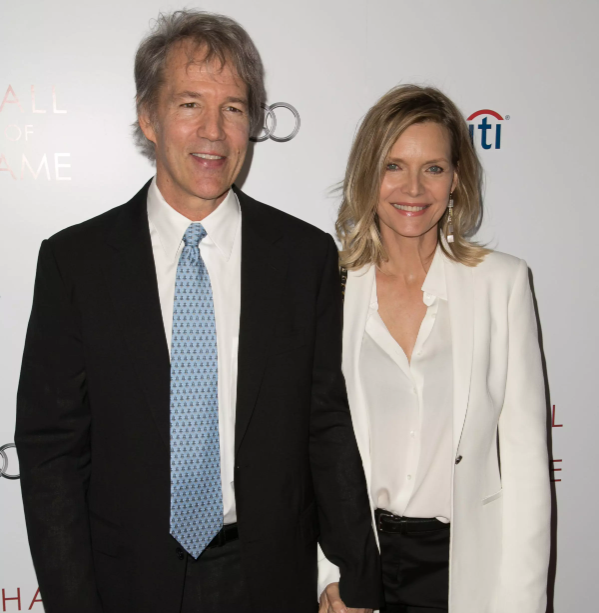 Back then, Michelle had been in a relationship with a number of celebrities. Initially, she met Peter Horton, an American actor, and director in the year 1981 in acting class. They started dating and later, they married on 5th October 1981. But their married life could not go long and their married life ended with a divorce in the year 1988. Horton later blamed the split on their devotion to their work rather than on their marriage. Then, she started her affairs in the year 1988 with John Malkovich who is an American actor, director, producer, and fashion designer. She also had a brief relationship with Dodi Fayed, Val Kilmer, Kevin Costner, and Michael Keaton. She also dated Fisher Stevens, an actor, director, producer, and writer by profession. The duo met each other during the New York Shakespeare Festival production of 'Twelfth Night', They ended their relationship in the year 1992 after dating for three years.

How much is Michelle Pfeiffer Net Worth?

Michelle Pfeiffer is a successful and talented actress as well as a producer. As of 2021, the net worth of Michelle is estimated to have $250 million as per sources. Starting her career in the late 1970s, she is still active in the entertainment industry. She is making a considerable amount of salary from her work. In 1999 she earned a career-high $12 million for The Deep End of the Ocean. That's the same as around $19 million after adjusting for inflation. In 2000, Michelle earned $10 million for What Lies Beneath. Appearing as Sukie Ridgemont in The Witches of Eastwick, the film grossed over $63.7 million domestically, the equivalent to $143.5 million in 2019 dollars. Appearing in "The Fabulous Baker Boys", the film was a modest success, grossing $18.4 million in the US (equivalent to $38 million in 2019 dollars). Batman Returns was a big box office success, grossing over US$267 million worldwide. Wolf was a commercial success, grossing US$65 million (equivalent to $112.1 million) at the domestic box office and US$131 million worldwide (equivalent to $226 million). Dangerous Minds received negative reviews, it was a box office success, grossing US$179.5 million around the globe. Her major source of wealth comes from her acting career and she is satisfied with her earnings. She is living a luxurious lifestyle from her earnings. She has also appeared in a television commercial for Lux soap. She has also been featured in Giorgio Armani sunglasses print ads in the year 2005. In the March 2019 issue of InStyle magazine, she announced her intention to launch a collection of fine fragrances called Henry Rose. The line launched in April 2019.

How tall is Michelle Pfeiffer?

Michelle Pfeiffer is a very beautiful actress with a slim body build. She stands tall at the perfect height of 5 ft 7.5 in or 171 cm. Her balanced weight is 119 lbs of 54 Kg. She has long blonde hair color and her eye color is blue. She has a radiant face with a svelte body figure. Her body measurement is 33-24-35 in or 84-61-89 cm. Her dree size is 2 US or 34 EU. Her shoe size is 8 US. She follows a strict Vegan diet. She believes that the food one intakes make a lot of difference both physically and mentally. She believes in the science of having Vegan food, which has the ability to ward off chronic diseases. Overall, she has got a healthy body with a charming smile attracting a lot of people towards her. She regularly does exercise to keep herself fit and fine.

Trivias About Michelle Pfeiffer You Need To Know.