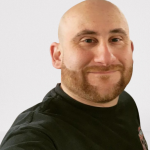 Mike Berk is a reality TV personality who is well recognized for his appearance on season 5 of the popular show, "90 Day Fiance: Before the 90 Days". Mike came on the show alongside his fiance Ximena who showcased their international relationship’s journey throughout the season becoming one of the fan-favorite couples, however, they ended things on a pretty rough note.

Besides, he has garnered much fame and popularity as he has followers of 108k people all around the world on his verified Instagram account: @mikeyb90day.

Mike Berk is called to be a "Racist".

He gained much recognition for his trustworthy approach toward Ximena who is 10 years younger than him. However, he has been labeled as a racist following his racial post which he made back in 2013 with the hashtag #obamagobackandbepresidentinkenya. As a result of such obnoxious and rude words, Mike Berk has been the focus of racial assaults, with some internet users even referring to him as a prominent Trump supporter.

Where is Mike Berk from?

Mike Berk was born and raised in the suburb of Thiells, New York, United States as one of the three children of his parents: Elaine L.(mother) and Larry Berkowitz(father). Having his full name Mike Berkowitz, Mike is a 34 years old man who was raised alongside his brothers; Stephen and Matthew. His father and both brothers worked as a firefighter at the "Thiells Fire Department".

Growing up, he was quite good in academics he went on to graduate with an associate of arts degree from the College of Westchester in 2006. He then joined Pace University-Pleasantville/ Briarcliff Campus. Later he got graduated with a bachelor's degree in science in 2011 shortly after which he began working as an IT support technician.

What does Mike Berk do for a living?

Is Mike Berk married? Who is Ximena Morales Cuellar?

Mike Berk met his love, Ximena Morales Cuellar on an international dating app in early 2020. Ximena is a Colombian single mother of two with whom Mike fell in love just the moment he started getting to know her. Even though Ximena couldn't speak English and MIke only spoke half-Spanish, the couple bonded well with the help of a translator app.

His friends even called him crazy for falling in love with Ximena, however, he never listened to them and even planned for a wedding and having kids.

When Mike first met his girlfriend Ximena Morales online, left his life working as a volunteer firefighter and taking care of his grandpa so he could go to Colombia and meet her.

Many people speculated that Ximena was with MIke just for money and luxury as on one of the episodes of the show, she asked for money for surgery on her breasts, which accounts for thousands of dollars.

Mike Berk has good earnings from his jobs and career as a reality personality. Having worked as a volunteer firefighter before and now as a social media director, he has earnings of reportedly $89k and earns around $1k-$1.5k per episode for his appearance on the reality shows.

Mike Berk is an average-looking man in his 30s. He has distinctive looks with his bald hair and brown eyes. He stands tall with a height of 5ft. 8inch.

Trivias About Mike Berk You Need To Know.