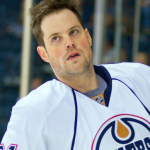 Mike Comrie is a Canadian former professional ice hockey player who was well known for playing for seven teams during his 13-year NHL career. Comrie came to recognition after he made a record of 33 during the 2001-02 season playing with the Edmonton Oilers.

Having scored 168 goals throughout his NHL career, Comrie retired in early 2012 after undergoing hip surgery for the third time. Comrie also is known for his relationship with his ex-wife, Hilary Duff with who he shares a son. Also, he is the son of a multi-millionaire father, Bill Comrie, and brother of popular hockey players, Paul, Eric, and Ty.

What is Mike Comrie famous for?

Where was Mike Comrie Born?

Mike Comrie was born on September 11, 1980, in Edmonton, Alberta, Canada. His birth name is Michael William Comrie. His nationality is Canadian. Comrie belongs to the White ethnicity while Virgo is his zodiac sign.

Born as the youngest son to his parents; Bill Comrie(father) and Theresa Comrie(mother), Mike was raised in his hometown alongside his two elder siblings; sister, Cathy Robinson, and brother, Paul Comrie.

His parents, however, got divorced later from which he also has two half-brothers; Eric and Ty from his father's second marriage both of who are hockey players. His father, Bill is a multi-millionaire as alongside Mike's uncles, Fred and John, he owned The Brick furniture company.

Growing up he developed a keen interest in sports especially hockey so he decided to pursue a career in it only. He attended Jasper Place High School during which he also played in the 1993 Quebec International Pee-Wee Hockey Tournament with a minor ice hockey team.

His talent got him drafted in the third round, ninety-first overall, in the 1999 NHL Entry Draft to the University of Michigan.

What does Mike Comrie do for a living?

What is Mike Comrie the hockey player's net worth?

Mike Comriehas quite good earnings from his profession as an ice hockey player. Having his career started in 1993, Mike always gave his best in every game that he even became a fan-favorite in a short time.

His first earning was when he joined the Edmonton Oilers signing an incentive-laden $10-million three-year deal which was well above the league maximum for the base salaries of 2001 draftees.

His last signing was a one-year contract worth $500,000 with the Pittsburgh Penguins in 2010 shortly after that he retired from the profession. Also, his ex-wife Hilary had to pay $2.4 million as part of their divorce settlement.

Also, the fact that his family's net worth comes around $500 million. Including his earnings from his several matches and games and contracts, Mike has managed to amass a healthy fortune estimated to be around $20 million.

Who is Mike Comrie married to now?

Mike Comrie isn't dating anyone at the moment. However, he was previously married to a popular American Disney star, singer, and actress, Hilary Duff. Mike and Hilary began dating in the summer of 2007 and after almost 3 years of being together, they got engaged in February 2010 shortly after getting married on August 14, 2010, in Santa Barbara.

Two years later, they welcomed their first and only son named Luca Cruz Comrie on March 20, 2012. Their marriage lasted for 4 years as they announced their separation on January 10, 2014. Their divorce was finalized in February 2016.

Everything to know about Mike Comrie Ex- Wife Hilary Duff

How tall is Mike Comrie?

Mike Comrie is a good-looking man with a well-maintained athletic body physique in his 40s. He stands tall with a height of 5ft. 10inches.(1.78m) while his body weighs around 84kg(185lbs).

Being a former ice hockey player, he always has maintained a balanced diet but had to undergo several hip surgery. He has a fair complexion with dark brown hair and a pair of brown eyes.

Trivias About Mike Comrie You Need To Know.