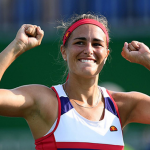 Monica Puig Marchan famed as Monica Puig is a Puerto Rican professional tennis player and the reigning Olympic champion as well as a Central American and Caribbean champion and Pan American silver medalist. She successfully became the first athlete to win an Olympic gold medal representing Puerto Rico. In the year 2010, she turned into professional. She plays by right hand. Her coach is Juan Todero.

Monica Puig was born on 27th September 1993. Currently, she is 24. She was born in San Juan, Puerto Rico. Her nationality is Puerto Rican. Currently, her residence is Miami, Florida, USA. Her father name is Jose Puig and her mother name is Astrid Marchan. Her full name is Monica Puig Marchan.

Monica has got an attractive body. She stands 1.70 m tall and has a balanced weight of 64 Kg.

Monica is possibly single. There is no any proof of her being married or relationship with any man. Her past as present relationship has not been revealed yet. She seems to a career-oriented woman.

Net worth of Monica