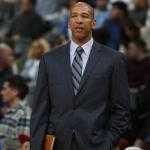 Montgomery Eli Williams, professionally known as Monty Williams is an American professional basketball coach and a former player. He is the head coach for the Phoenix Suns of the National Basketball Association (NBA). He was the assistant coach of Portland Trail Blazers from 2005 and 2010. He then head-coached the New Orleans Hornets/Pelicans from 2010 to 2015. He was an assistant coach for the Philadelphia 76ers before he joined the Suns in May 2019. He was also an assistant coach with the United States national team.

As a player, he was drafted by the New York Knicks in the 1994 Draft. In his nine NBA seasons, he played for the Knicks, San Antonio Spurs, Denver Nuggets, Orlando Magic and Philadelphia 76ers averaging 6.3 points, 2.8 rebounds, and 1.2 assists per game. He played in the Small Forward position. He retired from professional basketball playing career in 2003. He played college basketball at Notre Dame.

What is Monty Williams Famous For?

- Was the youngest head coach in the NBA at 38 years old.

Where was Monty Williams Born?

Monty Williams was born on 8 October 1971. His birth name is Montgomery Eli Williams. His birth place is in Fredericksburg, Virginia in the United States. He holds American nationality.

He attended Potomac High School in Oxon Hill, Maryland. He later committed to play for the Notre Dame Fighting Irish men's basketball team at the University of Notre Dame. At Notre Dame, he averaged 22.4 points, 8.4 rebounds during his senior season. He was an honorable mention All-American.

The New York Knicks selected him in the 1st round with the 24th overall pick of the 1994 Draft. He was drafted despite a pre-existing heart condition.

He retired from his playing career in 2003 due to his chronic knee problems.

He started his coaching career in 2005.

He won an NBA championship as a coaching staff intern with the San Antonio Spurs.

Portland Trail Blazers hired him as an assistant coach in 2005.

He became the assistant coach of the U.S. National team in June 2013.

He left the Pelicans in 2015 and became the assistant head coach of the Oklahoma City Thunder. He was there only for a season.

He became the Vice President of Basketball Operations for the San Antonio Spurs in 2016.

He is also a member of the NBA Competition Committee.

He returned to coaching as an assistant coach for the Philadelphia 76ers in 2018.

The Phoenix Suns announced in May 2019 that they had agreed to terms with Williams to be the team's head coach at the conclusion of the 76ers 2018-19 season.

Who is Monty Williams Married to?

Monty Williams was previously married to Indrid Williams. The couple had 5 children together, Jana, Micah, Faith, Lyle, and Ilijah. His wife, Ingrid died from injuries sustained from a car crash in Oklahoma City. Her car was struck head-on by a vehicle that crossed lanes after losing control.

How Tall is Monty Williams?

What is Monty Williams Net Worth?

Monty Williams is a basketball coach and a former NBA player. He spent 9 seasons playing in the NBA and later became the basketball coach. He is currently an assistant coach for Philadelphia 76ers and has already agreed his terms to join the Phoenix Suns at the end of the 76ers 2018-19 season. He earns from his coaching career. As of 2019, his net worth is estimated at $9 million.