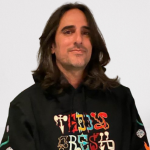 Moses Hacmon is an Israeli artist and architect. He was the winner of the President Award in 2001, the honor he achieved after his excellent performance in the academic period. The controversial American youtube star, Trisha Paytas is his wife. He is the older brother of Hila Klein, an Israeli American designer, and artist who is known for co-creating the YouTube channels h3h3Productions.

Moses came into the spotlight after the release of his first project "Faces of Water" in 2013 which soon became his masterpiece. The art was unveiled to the World at the Art Exhibition at "The Hub" Los Angeles and was highly praised by the public. Apart from his Artwork, Moses has been designing and producing Video Projection for theater shows and art shows based in Los Angeles and New York for the past 15 years.

What is Moses Hacmon famous for?

Where is Moses Hacmon from?

Moses Hacmon was born on 29th October 1977 in Tel Aviv, the most populous city in Israel. His birth name is Moses Hacmon. He holds Israeli nationality and belongs to mixed ethnicity. His birth sign is Scorpio. Since childhood, he has been practicing Judaism, his family's ancestors' faith.

Moses was born into a middle-class Jewish family.  His mother's name is Illana Hacmon while his father's name is unknown. His Israeli parents are of Sephardic Jewish (Libyan-Jewish and Turkish-Jewish) descent. He has a sister named Hila Klein who is also an artist and a designer.

Moses Harmon is currently linked with his beautiful celebrity Girlfriend, Trisha Paytas. Paytas is a well-known American YouTuber and singer. Aside from being a social media star, The 33 years old blonde has also appeared in several television shows and films. They began dating in March 2020.

On December 25, 2020, the love birds got engaged after Paytas accepted the proposal of Moses and git married in late 2021. As of February 2022, the couple announced that they are pregnant and expecting their first child. But it's unclear how far along they are or when the baby is due.

Previously, Moses was married to a lady named Deborah Cluff. However, the couple divorced in 2008. He got married a second time to a lady named Elizabeth Marle. Their wedding date is unknown, but they divorced in 2018. Moses also dated an Instagram influencer named Mercury, according to official sources. He has not disclosed any information about his children.

Everything to know about YouTuber Trisha Paytas

How rich is Moses Hacmon?

As of February 2022, the net worth of Moses Hacmon is estimated to be the US $1 million- $5 million. He has accumulated his fortune through his successful career as an Artist. He earns around $50,000 from working as an artist. He makes around $20K to $40K through his art exhibition and sales. Apart from these, he is also making extra money through his monetized youtube channel and his merchandise.

How tall is Moses Hacmon?

Moses Hacmon is 5 ft 10 inches tall and his body weight is around 80 Kg. He has an attractive body with handsome looks. He has a short hair style that is black in color. He has a pair of Dark Brown eyes. The French cut beard over his oval face provides him a gentleman's look.

Trivias About Moses Hacmon You Need To Know.