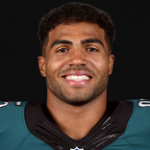 One of the American football linebackers who is a free agent is Mychal Kendricks. He was drafted by the Philadelphia Eagles in the second round of the 2012 NFL Draft. He won Super Bowl LII with the Eagles.

Mychal Kendricks is born on 28 September 1990 at Fresno, California. He was born to Yvonne Thagon and Marvin Kendricks who is a former running back at UCLA who played professionally in the Canadian Football League (CFL). He has a brother named Eric Kendricks and a younger sister named Danielle. He attended the University of California.

Probably, Kendricks is single. But it is reported that the stunning Rayne Connell could be his girlfriend.

Kendricks net worth is estimated to be $28 million.