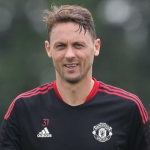 Nemanja Matić is a Serbian professional football player who plays for Premier League club Manchester United as a defensive midfielder. He has previously played for Kolubara, Kosice, Chelsea, Vitesse (loan), and Benfica. Starting his career as an attacking midfielder, he shifted to a defensive midfielder during his spell at Benfica. He is known for his consistent performances on the pitch and his combative style of play.

What is Nemanja Matić famous for?

Where is Nemanja Matić from?

Nemanja Matić was born on 1 August 1988. His birthplace is Sabac, SFR Yugoslavia. He holds both Serbian and Slovak nationality and he belongs to the white ethnicity. Likewise, his religion is Christianity and as per his birth date, his zodiac sign is Leo. He is of partial Macedonian descent as his maternal grandfather is from Volkovija. His father’s name is Dragon Matić, and his mother’s name is Biljana Matić who both were athletes. He grew up alongside his brother, Uros is also a professional football player, playing for Abha Club, a team in Saudi Arabia. Since childhood, he was interested in football.

How much is Nemanja Matić's salary?

He is a very successful footballer and his major source of earnings is from his football career. In August 2009, he signed for Chelsea from Kosice for a fee of around £1.5 million on a four-year contract deal. In January 2014, he rejoined Chelsea for a fee of £21 million (€25M, on a five-and-a-half-year contract. In July 2017, he signed for fellow club Manchester United on a three-year contract with an option for an extra year, for a fee reported to be in the region of £40 million. The net worth of Nemanja Matić as of 2022 is believed to have €35 million where he received £6.2 million as a yearly salary from his current club. His income is from contracts, salaries, bonuses, and endorsements. His market value is around €6 million. With these massive earnings, he is living a luxurious lifestyle.

Who is Nemanja Matić married to?

Looking at his personal life, he is a married guy. He got married to his beautiful girlfriend, Aleksandra Pavić in 2010. The couple tied the knot in a secret wedding ceremony 10 years ago, as they have celebrated their anniversary on February 29. However, they have known each other from their teenage years, when he played for Kosice. The couple is blessed with three children: the oldest child, a son named Filip Matić born on 18 February 2011, the second child, a daughter named Tea Matić born on 22 May 2014, and the third child, a daughter Anika Matić born on 14 January 2019. He has an intimate relationship with his wife and children where they are living their life happily together.

How tall is Nemanja Matić?

Nemanja Matić stands at a height of 1.94m i.e. 6 feet and 4 inches tall. He has a bodyweight of 83kg. Moreover, he has an athletic body build. His eye color is hazel and his hair color is brown. His sexual orientation is straight. His other body measurement such as chest size, biceps size, and waist size is still got to get revealed yet. Overall, he has got a healthy body.

Trivias About Nemanja Matić You Need To Know.