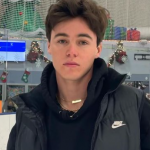 An American-born Tiktok star, lip-sync and dance content creator who rose to fame by sharing short-form videos on his Nick Austin TikTok account. He has more than 5 million fans on the social media platform which he started in 2018. He is also a member of the popular Hype House a mansion located in Los Angeles. He regularly collaborates with other teenage TikTok stars and comes up with entertaining and creative content for his various social media platforms. Along with lip-syncing, he is a good dancer and also known for his acting skills which are especially popular amongst his female fans.

An American Tiktok star Nick Austin was born on July 1, 2000, in San Diego, California, USA. He is the citizenship of America and holds American Nationality and his zodiac sign is Cancer. It is very difficult to assume that he is single and has no girlfriend. He has not stated the identification of his family in any of his social media until now but he featured his mother Jo Anny Taylor in an Instagram post on New Year's Day 2020. His mother Jo Anne Taylor works as a production assistant for the mortgage company "The Kolesar Team". He has not also revealed anything about his siblings or about his childhood, seems like he is very focused on developing his career in social media.

Nick Austin completed his primary and secondary high school education from his own hometown's local school. however, he has not disclosed any information regarding his educational qualification. He is an American with white ethnicity and Christian by religion.

Nick Austin is a very handsome and very talented American Tiktok Star who has become a huge sensation on the TikTok platform. He is a highly talented person who is known for his entertaining videos on TikTok. He has gathered 7.2M followers on his side. He is not just a good dancer but is also known for his acting skills. His lip-syncing and dancing videos are especially popular amongst his female fans. He regularly collaborates with other teenage TikTok stars and comes up with entertaining and creative content for his various social media platforms. Austin is also a member of the popular Hype House. Besides being popular on TikTok, he is also highly popular on Instagram and he has 2.7M followers. He has created his own youtube channel which is also gaining new subscribers every day. He has a 505K subscriber. His social media accounts show that he is very much active. He maintains a fitness routine in which he is very particular about what he eats and he loves exercising. Another thing that he loves is skateboarding. He regularly shows his skateboarding skills in his videos. He is a complete entertainer and his future looks very bright.

Nick Austin’s rise to stardom started with his TikTok account, which he started in 2018. His first video on TikTok featured Mia Hayward, who is another popular social media star. Within a span of two months, he managed to attract more than a million followers. He keeps his fans entertained by posting videos daily. He lip-syncs and dances to popular songs and his videos get thousands of likes within a matter of days. He has 7.2 million followers on his TikTok account and has got more than 309.3M likes for his videos.

The Hype House which was formed in December 2019, a mansion which is located in Los Angeles where most of the popular teenage Tiktok stars are members of this group. His first video of him doing a trick on a skateboard was posted on Instagram and he has more than one million followers and was active since 2017. He has his YouTube channel and 505K subscribers where he has just uploaded two videos only. "Avani Does My Makeup in the Hype House" is his very first video on youtube where he entertained his fans by revealing information about his first kiss, his fear of height, and his best friends.

He usually shares his fashionable outfits and modeling photos over his Instagram. He has earned the precious badge for being an ace TikTok comedian and now he is crowned as a "muser".

TikTok and other social media sponsorships are the main sources of his net worth. Nick Austin has more than 4.8 million followers and has more than 1.8 million followers on Instagram. He earns a very good amount of money using social media sites. He also earns for his merchandise via online shop fanjoy.com.As of 2020, Nick Austin has a total estimated net worth of USD 150,000.

Who is Nick Austin dating?

It is very difficult to assume that he is single and has no girlfriend although he is smart and cute and is hugely popular among youth, especially female fans. Fans have long speculated as to whether or not Austin and Avani Gregg are dating. The two are extremely close and they frequently collaborate on each other's TikTok, Youtube, and Instagram. It's not yet revealed about his relationship with Avani Gregg.

How tall is Nick Austin?

Nick Austin is a handsome and cool-looking guy with a cute and charming face and smile. He has a slim and attractive body with a height of 5 feet 9 inches and weighs 63 kg. He has beautiful dark-black eyes and his hair color is Brown. His body measurement is 30-27-31 inches. He is always concerned with keeping him fit and attractive. Overall, he has got a healthy body.

Trivias About Nick Austin You Need To Know.