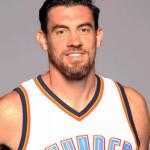 Nicholas John Collison, professionally known as Nick Collison is an American former professional basketball player. He played his entire professional career with the Seattle SuperSonics/Oklahoma City Thunder franchise. He played in the center/power forward position and wore jersey number 4. He was drafted by the SuperSonics with the 12th overall pick in the first round of the 2003 NBA draft. Later, he retired as a member of the Thunder in 2018. He played college basketball at Kansas.

The Thunder is set to honor Nick Collison for his 15-years service. The Thunder announced on 12 January 2019, that they would be retiring Nick Collison's jersey number 4.

Kevin Durant of Golden State Warriors will attend the Collison's jersey retirement, according to the sources.

Nick Collison was picked by the Seattle SuperSonics with the 12th overall pick in the first round of the 2003 NBA draft. He spent his entire career with the franchise, averaging 5.9 points. He announced retirement from professional basketball in May 2018.

Nick Collison was born on 26 October 1980. His birth name is Nicholas John Collison. He was born to a father, Dave Collison, and a mother, Judy Collison. He belongs to North American ethnicity. His birthplace is in Orange City, Iowa, in the United States. He holds American nationality. His zodiac sign is Scorpio. He grew up in Fort Dodge and Iowa Falls.

He attended Iowa Falls High School. Later, he enrolled at the University of Kansas to play college football.

He attended Kansas University, where he played college football. he helped Kansas to reach two consecutive Final Fours, in 2002 and 2003. The duo, Collison and Kirk Hinrich were considered the best duo in college basketball. He finished his college career as the leading scorer in the history of the Big 12 Conference.

For his contribution and achievements at Kansas, his jersey number 4 was retired by the Kansas Jayhawks in November 2003.

Seattle SuperSonics selected Collison with the 12th overall pick in the first round of 2003 NBA draft.

He missed the 2003-04 season due to injuries and made his debut in November 2004 against the Los Angeles Clippers.

In 2008, the franchise moved to Oklahoma City. Thus rebranding the team like the Thunder.

He helped the Thunder reach the NBA Finals in 2012.

Collison extended his contract with the Thunder in February 2015.

He resigned with the Thunder to a one-year deal in July 2017.

He announced his retirement from professional basketball on 10 May 2018. He played his entire career with the Seattle SuperSonics/Oklahoma City Thunder franchise.

The Thunder announced in January 2019 that they would retire his no. 4 jerseys. It was the first number retired by the Thunder.

He has also played for the United States national team at the 2002 FIBA World Championship.

He is a married man. He is married to his longtime girlfriend Robbie Harriford. They dated for quite a long time before tying a knot to each other in July 2007. He has a daughter named Emma.

The Seattle SuperSonics star stands at a height of 2.08 m i.e. 6 feet and 10 inches tall. He has tall height benefitting him on his basketball career. He has a body weight of 255 lbs i.e. 116 kg. He has dark brown eyes and his hair color is also dark brown.

The former American professional basketball player has a net worth of $25 million. He earned his fortune playing his entire career with the Seattle SuperSonics/Oklahoma City Thunder.