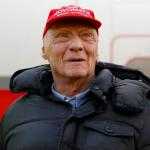 An Austrian former racing Formula One driver, Niki Lauda was a legendary personality who is considered as one of the most successful and greatest F1 drivers of all time.

Lauda was a three-time F1 World Driver's Champion and an aviation entrepreneur.

What was Niki Lauda famous for?

When was Niki Lauda born?

Lauda was born in one of the wealthiest families in the Vienna. He was born to Elisabeth Lauda (Mother) and Ernst-Peter Lauda (Father). His father had owned a paper manufacturing industry. His paternal grandfather, Hans Lauda was the Viennese-born industrialist and a successful businessman. He has a sibling brother named Florian Lauda.

How was Niki Lauda's Early Life?

Niki Lauda was raised in his hometown Vienna. His nationality was Austrian and his ethnicity was White Caucasian. Pisces was his zodiac sign.

Belonging to a business family, Lauda's parents also wanted him to take over their family business. But Lauda was more interested in driving the race cars and always wanted to become an F1 driver. He used to play with cars when he was a toddler.

Lauda was weak at his studies however, he was smart enough to convince his parents to buy a car, VW. by showing an excellent (duplicate)mark sheet of his school.

He crashed his car by his careless driving and made the money loss of $805.486. Later, he went to The Issac Newton School of Driving for improving his driving skills.

His family didn't support him for his racing career but he went to drive private Porsche and Chevron sports cars.

How was Niki Lauda's Career?

Lauda pursued a career in auto racing despite his family being staunchly against his dreams. He began racing in the late 60s. He actually took out a bank loan of $37152.01 to buy his way into the Formula 2 circuit in 1971.

Lauda first won the F1 championship driving for Ferrari in 1975. Then in the year 1976, German Grand Prix at the Nurburgring race track, Lauda collided with a barrier and his car went up in flames. He inhaled toxic fumes and suffered horrific burns that left him close to death and with permanent facial scarring. Nevertheless, he managed to race again just six weeks after the accident, taking fourth place in the Italian Grand Prix.

Іn 1982, hе was lured back to racing a few years later by a big offer from McLaren.The year 1982 wаѕ оnе оf thе bеѕt ѕеаѕоnѕ іn Nіkі’ѕ саrееr. Ніѕ fіnаl drіvе wаѕ thе Аuѕtrаlіаn Grаnd Рrіх. He won the F1 championship for a third time in 1984, before retiring from the sport for good the next year.

On 8th February 2018, he became the Brand Ambassador of Novomatic, ExCeL London

How was Niki Lauda's Personal life?

Lauda was married to his first wife Marlene Knaus in 1976 but they got divorced in 1991. The couple had two children together: Mathias Lauda, a race driver himself, and Lukas Lauda, who acted as Mathias’s manager.

In 2008, he then married his second wife named Birgit Metzinger. Birgit Metzinger is a flight attendant for his airline. The couple was blessed with twins Mia Lauda and Max Lauda.

His son Christoph Lauda was from his extra-marital relationship.

Lauda died on May 20, 2019, at University Hospital Zurich, Switzerland. Niki had suffered from the kidney problem for a very long time. He even had gone for dialysis treatment to a Swiss Clinic.

The Austrian driver had often suffered health problems before over the past twenty years; Lauda received a lung transplant from his brother in 1997. Years later when that failed, he received another from his second wife,

Birgit Metzinger. On Sept. 2018, the 69-year-old fell ill when he was on vacation in Ibiza and was immediately taken to the hospital back in Vienna.

What was the net worth of Niki Lauda?

Niki Lauda was being paid $2.478980 million per year in the four-year contract as a Non-executive Chairman in Mercedes AMG F1 team.

Lauda had an estimated net worth of over $120 million.

His name came in the list of the top 10 most opulent formula one drivers of all time. He was also the owner of the Lauda Air.

How tall was Niki Lauda?

He had a fair complexion with scars on his face, his hair color was bald and his eye color was blue.