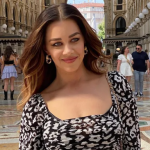 Oana Nechiti is a Romanian dancer and choreographer who is best known for being the former professional dancer on the German live dance show "Let's Dance". The show is the German version of "Strictly Come Dancing". Oana Nechiti made her appearance in the show from its 6th season to 11th season. Also, she is married to her husband, Erich Klann, who is also a former professional dancer on "Let's Dance". The couple together runs a dance school in the Paderborn district of Elsen since 2017.

What is Oana Nechiti famous for?

Where was Oana Nechiti born?

Oana Nechiti was born on February 23, 1988 in Timișoara, Romania. Her birth name is Oana Andreea Nechiti. She holds Romanian-German nationality. Her ethnicity is mixed while Pisces is her zodiac sign.

She was born as the second daughter to her parents. Her father is a lawyer while her mother is a secretary. She has an elder sister, Diana Oprea. Diana is an entrepreneur and actress who owns a hotel "Kubiq Residence".

Oana Nechiti was raised in her hometown, Timișoara along with her sister. From a young age, she was interested in dancing, so, her parents made her join dance classes. Following this, she competed in several junior dance competitions, winning most of them.

Since the age of 14, she has reached the finals of the national championships in Latin dance every year. She also joined drama and choreography school in Timisoara from 2004 to 2008.

Oana Nechiti has also represented Romania at the World Championships in 2003, 2007, and 2008. She dropped out of medical school to pursue her career as a dancer, choreographer, and trainer.

Who is Oana Nechiti's husband?

Oana Nechiti is a married woman and is currently married to her only husband, Erich Klann. Klann is a German ballroom dancer and choreographer who competed in "Lets' Dance" from its 4th season to the 13th season. He won the competitions three times respectively in 2012, 2013, and 2016.  The couple started dating each other in 2009 and later got married on November 9, 2017, in a private ceremony. The couple is blessed with two sons, Nikolas Klann and Liam Klann. Nikolas was born in 2012 and their little son, Liam was recently born on March 26, 2022. Oana Nechiti and her family currently reside in Germany.

How much is Oana Nechiti's worth?

Oana Nechiti has earned a good amount of money from her profession as a dancer and choreographer. Having started her professional career in 2010, Nechiti has come a long way becoming one of the famous Romanian-German choreographers. She and her husband, Klann also run their dance school "Millennium". Including all of her earnings, Nechiti has an estimated net worth of $1.5 million as of 2022.

How tall is Oana Nechiti?

Oana Nechiti is a beautiful woman with a well-maintained hourglass body physique in her mid-30s. She has a fair complexion with light-brown hair and a pair of blue sparkling eyes. She stands tall with a height of 5ft 6inches(1.68m) and has a bodyweight of 62kg(137 lbs). Her body measurement is 34-25-36 inches. Her bra cup size is 34B.

Trivias About Oana Nechiti You Need To Know.