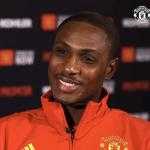 Football and goals, everyone loves it. Today we are talking about Nigerian professional footballer Odion Ighalo who has scored 99 career goals and 4 national goals to date and is considered as one of the highest-paid footballers of Nigeria. The 28-year-old striker currently plays for Chinese club Changchun Yatai in the Chinese Super League and also for the Nigerian National team which qualified for the 2018 FIFA World Cup. Let's know more about him through this

What is Odion Ighalo famous for?

Where is Odion Ighalo born?

Going back to his early life, Odion Ighalo was born in Lagos, Nigeria to Nigerian parents; Martina Ighalo and Paul Ighalo in the year 1989. He was interested in playing football from his early days as a child and joined the youth club of Prime FC to start his career. Similarly, he has a brother as well whose name is Daniel Ighalo. Information regarding his academic qualifications is yet to be

When did Odion Ighalo pursue his soccer career?

Is Odion Ighalo married or not?

Odion Ighalo is a married man. He is married to a woman named Sonia since 2009. Together the couple has three children; two sons, and a daughter. Despite a busy schedule, he spends quality time with his family. He often visits the world mesmerizing his holiday destination with his family during vacations.

Further, He is very charitable as he set up various charitable organizations in Nigeria to poor people, children and to improve the education system. For his contribution, he was awarded BOA Awards in 2017.

What is the net worth of Odion Ighalo?

Odion Ighalo was a professional football player, He earns the sum of a good amount of money and salary from his profession in the field of the sports industry. As per online sites, his estimated net worth said to be $20 million and annual salary is somewhere around $14 million at present.

How tall is Odion Ighalo?

Being a sportsman, Odion stands a height of 6 feet inches and weighs around 73 Kg. Similarly, he has an athletic body with black hair and eyes. His other body information is yet to be disclosed.