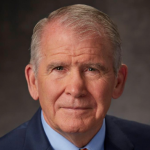 A political commentator, Author, Military historian, and former lieutenant colonel are already impressive qualities to have. But Oliver North is not an ordinary man, and he happens to be Silver Star Medal, Bronze Star Medal, Purple Heart Medal, and Defense Meritorious Service Medal to name few sitting proudly in a broad chest of his. The glorious career of Oliver does have a spot to forget as he dragged in a political scandal during the Reagan administration.

What is Oliver North Famous for?

Oliver North: 'Informed' I will not be renominated NRA president

National Rifle Association President Oliver North told NRA members on Saturday he will not be renominated president of the group following a dispute with its CEO Wayne LaPierre.

The announcement was made in a letter read Saturday during the NRA convention being held in Indianapolis, NRA officials confirmed to CNN.

North said in the letter that he hoped he would be renominated for a second term but, "I am now informed that will not happen," according to a video of the letter being read.

North, a central figure in the Iran-Contra scandal, was selected last year to be the NRA's president. At the time, LaPierre  the group's longtime executive and key public face called him "hands down, the absolute best choice to lead our NRA Board." Already a controversial figure due to the Reagan-era scandal over secret arms sales to Iran, North joined the preeminent gun rights group at a critical juncture for it as it responded to renewed calls for gun control in the wake of the school shooting in Parkland, Florida.

But on Friday, the Wall Street Journal reported that LaPierre told the NRA's board that he had refused a demand by North to step down and accused the NRA president of trying to extort him.

Where is Oliver North born?

Back to his early life, Oliver North was born in San Antonio, Texas, US. He was the son of Ann Theresa and Oliver Clay North, a U.S. Army major. He is American by nationality and belongs to the white ethnic group. His birth sign is Libra.

He was raised in Philmont and graduated from Ockawamick Central High School in 1961. He later joined the State University of New York at Brockport for two years. He also enrolled at the US Marine Corps Base Quantico in Virginia.

When did Oliver North start to work as a Government employee?

Who is the wife of Oliver North?

The former Colonel is happily married to Betsy Stuart and blessed with four children including three daughters (Dornin, Sarah, and Tait North) and one son Stuart North.

Oliver and his wife shared the wedding vows on 13 November 1967, after seven months of dating affair. The pair met each other when Oliver was 25 years old and his wife was of age 23. They reportedly had a blind date after one of his cousins showed Betsy his photograph.

After he got married, he started attending Anglican services along with his family, wife, and kids, even though he was grown a Catholic.   While talking with crosswalk.com on 6 October 2018, Oliver mentioned his lady, Betsy as the strongest woman.

How much is Oliver North net worth?

The former colonel has amassed a fair net worth after a long career in the military and as a political commentator on Fox. His net worth reaches a decent $5 million dollars. The retired colonel now lives a peaceful life, and his net worth is not expected to rise in coming days.

How tall is Oliver North?

The 73-years-old political commentator stands at the height of the 6 feet (1.83 meters). Similarly, his eye color is brown and hair color is white and brown. His other body information is yet to be disclosed. In the case of disclosed, we will let you know.

Trivias About Oliver North You Need To Know.