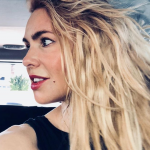 Olivia d'Abo is an English-American actress, voice artist, singer, model, and songwriter. She is famous for her role as Karen, Kevin's rebellious teenage hippie sister in the ABC comedy-drama series The Wonder Years (1988–93), and recurring villain Nicole Wallace in Law & Order: Criminal Intent(2002-08). She has done voice performance for many popular animation series and films like Justice League Unlimited (2004), tar Wars: The Clone Wars (2008), Ultimate Avengers and Ultimate Avengers 2: Rise of the Panther (both 2006) and many more. As a singer, she released her debut album Not TV  in July 2008.

Where is Olivia D'Abo born?

D'Abo was born as Olivia Jane d'Abo on 22 January 1969 in London, England, as the daughter of Maggie London, an English model, and actress from the 1960s, and Mike d'Abo, an English singer and member of 1960s musical group Manfred Mann. She has an older brother, as well as two half-brothers and one half-sister: elder brother Ben, younger half-brother Bruno, and younger sibling twins Ella and Louis on her father's side. Olivia attended high school in the United States at Los Feliz Hills School in Los Angeles and thereafter attended Pacoima Junior High School in Pacoima, California. Olivia has dual citizenship, English-American and she belongs to White ethnicity. Her religion is Christianity and her zodiac is Aquarius.

How is Olivia D'Abo's career?

D'Abo's began her acting career from her film debut, Conan the Destroyer, released on 29 June 1984 as the supporting role of Princess Jehnna. Soon followed her supporting role of Paloma the peasant girl in Bolero (1984). From 1988 to 1991, D'Abo held the contract role as Karen Arnold in the ABC comedy-drama series 4The Wonder Years. D'Abo made five appearances as a recurring villain Nicole Wallace in the NBC police procedural drama series Law & Order: Criminal Intent between 2002 and 2008. Her other notable TV and film credits include Wayne’s World 2, The Spirit of ’76, Live Nude Girls, The Last Good Time, The Big Green, Nuclear Family and some more. In animation, D'Abo has performed voice-over as Sony Blade in Mortal Kombat: Defenders of the Realm (1996), Melanie Walker/Ten in Batman Beyond (1999–2000), Morgaine le Fey in Justice League Unlimited (2004), Jedi Master Luminara Unduli in Star Wars: The Clone Wars (2008),

Carol Ferris in Green Lantern: First Flight (2009), Natalia Romanoff in Ultimate Avengers and Ultimate Avengers 2: Rise of the Panther (both 2006) and many more. As for her music career, Olivia embarked on her music career from her debut album Not TV released in July 2008. As a singer and songwriter, D'Abo performed backing vocals for Julian Lennon's Help Yourself, and a duet with Seal's "Broken". She co-wrote the song "Love Comes from the Inside" with Italian singer Laura Pausini, which was featured on Pausini's English language debut album From the Inside. She also won the 2012 Broadway World Award for her performance in theatrical, Entertaining Mr. Sloane(2011). She is currently recording new music materials. She also hosts a weekly podcast every Friday launched in October 2015.

The 50 years old, actress, Olivia is currently single. She was married to music producer and songwriter Patrick Leonard in August 2002. But a couple got separated in August 2011 ending the divorce at Los Angeles County Superior Court in November 2012. They have one child from the marriage, born in 1995. Before that, D'Abo was also engaged to actor Thomas Jane from 1998 to 2001. They worked in several projects together, including The Velocity of Gary and Jonni Nitro. She was formerly engaged to singer Julian Lennon((1990 – 1992).

What is the net worth of Olivia D'Abo?

The comedy-drama series actress, Olivia has an estimated net worth of $3 million. She has accumulated this amount from her multiple careers as, voice-artist, singer, actress, songwriter, and model. Her versatile character has helped her to seamlessly travel through theatre, television, and music accomplishing success in all three. Her salary is still not revealed by her. Olivia has been active almost three decades in the entertainment industry so she must have garnered a decent sum from her career. Further information regarding her cars, houses and other businesses is still under review.

How old was Olivia D'Abo?

The 50 years old, voice-artist, D'Abo is still bending people's eyes on her as she looks very gorgeous and sexy even today. The comedy-drama actress has a decent height of 5ft 6inches. The singer-songwriter, guitarist and pianist, has a very balanced bodyweight of 58kg. She has beautiful blonde hair and a pair of brown eyes. The versatile actress has body measurements of  34-26-33 Inches. Her bra size is 34B. She fits in a dress size of 4(US). her shoe size is still under review. She has a straight sexual orientation.