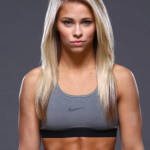 One of the American mixed martial artist, author and former model is Paige Michelle VanZant who is famous as Paige VanZant. She is signed to the Ultimate Fighting Championship to the flyweight division and was ranked no. 15 contender in official UFC flyweight rankings. She also appeared in television series.

Paige VanZant’s full name is Paige Michelle VanZant. She is born on 26 March,1994 at Dundee, Oregon, U.S. Her father name is Steve VanZant and mother name is Rachel VanZant. Her parents owned a dance studio. She started dancing ballet, jazz and hip hop for more than 13 years. She was considered a tomboy and loved the outdoor games as riding dirt bikes and fishing. For Bissell she appeared in mop commercial. She was regularly bullied when she was in high school by which she got motivated and got a reason to join martial art and become martial artist for having the ability to defend herself.

Paige VanZant height is 1.63 m and weight is 57 kg. Her eye color is black and hair color is blonde. She has the balanced and healthy body.

Paige VanZant began training in boxing and other martial arts at UFC veteran Ken Shamrock’s gym. On 30 June she made professional MMA debut at UWF’s Tournament of Warriors finale and won by split decision. She also faced Amber Stautzenberger at Premier Fight Series 2 on 22 September 2012 and won by unanimous decision. In 5 January 2013 she faced Tecia Torres at Invicta FC 4 at the Memorial Hall in Kansas City in which she lost by the unanimous decision.

Paige VanZant was announced as one of 11 women signed by Ultimate Fighting Championship on December 2013. She made her debut by defeating Curran by TKO in third round. She signed the new contract at 17 September 2015. She faced many fighter and won several games by unanimous decision. She even lost some matches. She ended her straw weight division by ranking no. 12.

Paige VanZant moved to 125-pound flyweight division and was booked on 7 October against Jessica Eye. But due to her back injury and further aliments such as herniated disc, sinus infection, double ear infection, pink eye and ringworm. So her debut took place in 2018 on 14 January 2018 and lost by unanimous decision against Jessica Rose-Clark in UFC Fight Night.

Paige VanZant competed on Dancing with the Stars on season 22 on 8 March, 2018. She partnered with professional dancer Mark Ballas. They reached to the finals and finished in second place.

She was announced one of the celebrity to take part in cooking competition on Food Network TV series Chopped. She then edged in desert round to become the winner of Chopper

Paige VanZant on 10 April 2018, released a book on her own biography named as Rise: Surviving the Fight of my Life. She included her UFC career, personal battles and appearance on Dancing with the Stars.

She was bullied by group of girls. It was said that she had sexual intercourse with various boys at the party. But in reality she was raped by the boys after she was intoxicated at the party. The bullying included mocking her last name Sletton which changed to “Paige Slutton’. So due to persistent bullying she changed her last name to VanZant legally.