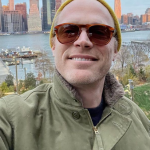 Paul Bettany is an English actor who is mostly known for his role of Vision in the Marvel Cinematic Universe films; Avengers: Age of Ultron (2015), Captain America: Civil War (2016), and Avengers: Infinity War (2018).

He also got recognition for voicing J.A.R.V.I.S. in Marvel Cinematic Universe films including Iron Man (2008), Iron Man 2 (2010), The Avengers (2012), and Iron Man 3 (2013). He also received a Primetime Emmy Award nomination for portraying the role of Vision in the American television miniseries "WandaVision" in 2021.

What is Paul Bettany Famous for?

Where was Paul Bettany Born?

Paul Bettany was born on May 27, 1971, in London, England, United Kingdom. His birth name is Paul Bettany. His nationality is English. Paul belongs to the White ethnicity while Gemini is his zodiac sign.

Paul Bettany was born as the son of Anne Kettle(mother) and Thane Bettany(father). His mother was a stage singer, theatre teacher, and stage manager while his father was an English actor, dancer, drama teacher, and also the godfather to Sophie, Countess of Wessex.

Paul was baptized and confirmed as a Roman Catholic, but his church attendance dwindled after that. Bettany then tried out various Christian denominations with his father, including Methodist and Church of England groups. Now, he has declared himself an atheist. He has an elder sister named, Sarah. He also had a younger brother, Matthew who died at the age of 8 after a fall at Queenwood.

Following his brother's death, he dropped out of school and left home. He continued his living by playing his guitar in the streets as a busker and lived in a small flat in London. However, 2 years later, he found a new job in a home for the elderly.

He then joined the Drama Centre London in Chalk Farm for a three-year course in 1990.

Who is Paul Bettany's wife?

Paul Bettany is a married man and has been married to his only wife, Jennifer Connelly. Jennifer is a popular American actress who is well known for her performance in "Once Upon a Time in America".

They met for the first time while they were in relationships with other when they starred together in the 2001 film, "A Beautiful Mind". Bettany had developed a crush on her as a teenager after seeing her in the 1986 film, "Labyrinth".

They soon got connected and after ending their previous relationships, the couple dated and got married on January 1, 2003, in Scotland. After their marriage, they moved to Brooklyn Heights after having lived together in Tribeca.

The couple has been married for over 18 years and is blessed with two children; daughter Agnes and son Stellan. He is the stepfather to Connelly's son from a previous relationship.

Besides, Bettany is close friends with actor Johnny Depp with whom he has worked in several films. In the recent Depp defamation trial against his ex-wife, actress Amber Heard 2020, the text messages between Bettany and Depp from 2013 were used as evidence.

The trial between the ex-couple has been on the headlines of 2022.

Paul Bettany has quite good earnings from his professional career as an actor. Having his career started making his stage debut as Eric Birling, Bettany gained international recognition when he became a part of the Marvel UNiverse films.

He has managed to come a long way becoming one of the most popular actors in his decade-long career. His source of income surely comes from his acting, writing, and direction of movies.

Bettany having a profound masculine voice is a millionaire having a net worth estimated to be around $50 million.

Paul Bettany is a handsome man with a maintained body physique in his 50s. He stands tall with a height of 6ft. 3inch. while his body weighs around 70kg. He has a fair complexion with blonde hair and blue eyes.

Trivias About Paul Bettany You Need To Know.