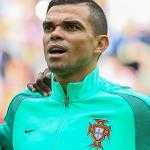 One of the well-known player is Kepler Laveran de Lima Ferreira who is famously known as Pepe. He is a Portuguese professional footballer who plays as a centre back for Turkish club Besiktas and the Portugal national team. He joined Real Madrid in 2007 after spending three years with Porto. He became a member of Portugal's national team in 2007.

Pepe height is 1.88 m and weight is 81 kg. His eyes color is brown and hair color is black. He has a balanced and healthy body. He has the attractive personality.

Pepe first started playing football with the local team. Then after he joined Maritimo.  He was promoted in the 2002-2003 squad. He also qualified in UEFA Cup. He contributed 1 goal in 30 matches.

Then Pepe signed Porto at 2004. At first he was used as backup only. But after wards he proved himself as the best defender and won back to back league matches.

Pepe was transferred to Besiktas on 4 July 2017. On 13 august he scored his for goal for the team. He played many matches and contributed to win in many matches.

Pepe net worth is estimated to be $5 Million. He is one of the best defender.