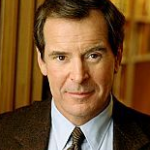 Peter Charles Archibald Ewart Jennings shortly named as Peter Jennings was a Canadian-American journalist. He served as the sole anchor of ABC World News Tonight from 1983 until his death from lung cancer in 2005. He started his career early, hosting a Canadian radio show at age 9. He began his professional career with CJOH-TV in Ottawa during its early years, anchoring the local newscasts and hosting the teen dance show Saturday Date on Saturdays. He was one of the "Big Three" news anchormen, along with Tom Brokaw of NBC and Dan Rather of CBS.

Peter Jennings, the ABC News journalist whose voice was known to millions, will be honored by a new work from composer Philip Glass, whose music is known throughout the world. Glass has been commissioned by Canada's National Arts Centre (NAC) to create a new orchestral piece in honor of the Canadian-born Jennings, who died of lung cancer in 2005 at the age of 67. The new piece will be an "ode to the freedom of the press" that is "developed around the theme of truth in our times," according to NAC officials. "Philip Glass ranks among the most influential composers of our time, and is a unique and bold artist who has long explored themes of truth, honesty, and justice through his work," said NAC Music Director Alexander Shelley. "It is a thrill and a privilege that he will be creating a new piece for Canada’s National Arts Centre Orchestra, honoring Peter Jennings’ legacy and scrutinizing a theme which has never seemed more important or relevant." "I was very impressed by the NAC Orchestra when receiving the Glenn Gould Prize, and was excited to receive this commission from them to honor the person, work and ethos of Peter Jennings, on a theme which is very close to my heart," Glass said. Jennings began reporting for ABC News in 1964 and was named anchor and senior editor of ABC's "World News Tonight" in 1983.

What was the birthplace of Peter Jennings?

Peter Jennings was born on 29th July 1938 in Toronto, Ontario, Canada as Peter Charles Archibald Ewart Jennings. He was the son of Elizabeth(mother) and Charles Jennings(father). His father was a prominent radio broadcaster for the Canadian Broadcasting Corporation(CBC). His sister’s name is Sarah and she was his younger sister. His nationality was Canadian-American and his ethnicity was White. He was Christian by religion. He attended Trinity College School in Port Hope, Ontario when he was 11 years old. Likewise, he transferred to Lisgar Collegiate Institute. He attended Carleton University. Similarly, he attended the University of Ottawa.

What was the Cause of Death of Peter Jennings?

His death was a shock to many people. On 7th August 2005, Peter Jennings left this world due to lung cancer at the age of 67. He died in Manhattan, New York, the U.S. He died with the presence of his family around him in peace. The new president, David Westin said that his colleagues and friends won’t be the same without him.

How was the Career of Peter Jennings?

Who was the Wife of Peter Jennings?

Regarding the marital status of Peter Jennings, he was a married person. He was married to Valerie Godsoe. Due to some reasons, the duo later divorced. After that, he e married Anoushka Malouf who was his longterm girlfriend. But, their married relationship did not last long and they divorced. In the year 1979, he married Kati Marton and divorced in the year 1993.

What was the Net Worth of Peter Jennings?

The net worth of Peter Jennings was $50 million that he earned from his career. His annual salary was $10 million dollars at the time of his death. His source of income was from his journalist career. He was highly loved and admired by his fans for his work. He was an inspiration to many aspiring journalists and news anchors. With his hard work and strong presentation, he had definitely won the heart of all the audiences and his colleagues. He was the leading example of a working independent and successful man.

How tall was Peter Jennings?

Peter Jennings was a very handsome person with a cool attitude and personality attracting a lot of people towards him. Unfortunately, there are no details about his body measurements as of now such as height, weight, waist size, bicep size and more. He had a great body. Moreover, he was chosen in 50 Most Beautiful People in the world by People magazine. He had dark brown eye color and light brown hair color. His other body measurements will be added soon once we get details about it.