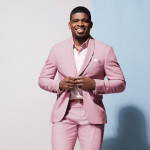 A Canadian professional ice hockey player P.K. Subban currently plays as a defense for the Nashville Predators of the National Hockey League (NHL). He made his NHL debut with the Montreal Canadiens in 2009. He is the winner of 2013 Norris Trophy as the NHL’s top defender.

Subban was born as Pernell-Karl Sylvester Subban in Toronto, Ontario, Canada. His nationality is Canadian and he is of Jamaican-Montserratian ethnicity. His mother’s name is Maria Subban and father’s name is Karl Subban. He grew up with four siblings named Natassia, Natasha, Jordan, and Malcolm.
There is no information about his childhood life and educational background.

Career and Achievements of P.K. Subban

As an Ice Hockey player, he won numerous awards from his successful career which as mention below:

The Net Worth of P.K. Subban

The amazing hockey star has been very successful since the inception of his career. He has earned huge wealth for himself all thanks to his wonderful defensive skills.
In addition to that, the player is currently regarded as one of the top earners in the league. According to Forbes, P.K. Subban is the seventh highest-paid player in the hockey league. He earns up to $11 million in salary and $1.5 million from endorsements. His estimated net worth said to be $ 25 million at present. Similarly, Subban has signed endorsement deals with top brands such as Gatorade, Samsung, and Air Canada, among others.
Furthermore, On September 16, 2015, Subban announced a commitment to raise $10 million for the Montreal Children's Hospital by 2022. The hospital called it "the biggest philanthropic commitment by a sports figure in Canadian history.

Subban has kept his personal life private and out of the spotlight. He usually doesn’t talk about his private life in the media and public. He hasn’t mentioned his affairs publically and has managed to keep it low profile.
There is no record of his marriage and divorce until now. He is currently focusing on his work. According to the records, he is in a relationship with American alpine ski racer Lindsey Vonn since June 2018. Although she is five years older than Subban, the duo has been enjoying a blissful relationship.
Off the ice, Subban has a well-known, stylish sense of fashion. He often is seen in designer suits and unique accessories. That appreciation of style has been parlayed into being the spokesman for an RW-CO line of suits.

The amazing hockey prodigy is a very passionate and talented player who never fails to bring out his best while in the field of play. Subban has a height of 6 feet. His body weighs 95kg. Besides this, he has black hair. Also, his eyes are black.