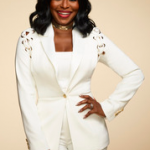 The famous actress who is known for the famous series ‘Married to Medicine’ is Quad Webb-Lunceford. She is also a renowned business owner, a philanthropist and a major icon in the fashion industry.

Quad Webb-Lunceford was born on 13 May 1980 at Memphis, Tennessee. is a graduate of Tennessee State. She has struggled a lot for education. Later she joined Tennessee State University and graduated. She obtained her Bachelor of Science degree in Biology and minor in Chemistry.

Overall, she has a balanced and healthy body. But her weight and height are not known.

Quad is a married woman.  She is married to Dr. Gregory Lunceford who is the best psychiatrist. They married in 2012. She openly and smartly presents her personal details as well as her husband in the show. They do not have a child together. They have two puppies named Karrie and Khloe. They two were happy together.

But things are not the same. In May 2018, she filed for divorce and accused her husband of cheating on her. They officially separated in April 2018. Recently in August 2018, the two reality stars have been seen in court. The divorce between them has really heated up, according to OK! Magazine.

Quad’s net worth is estimated to be $1.5 million.

Trivias About Quad Webb-Lunceford You Need To Know.