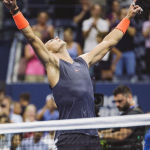 One of the popular Spanish professional tennis players is Rafael Nadal Parera who is famous as Rafael Nadal. He is currently world No. 2 in men’s singles tennis by the Association of Tennis Professionals (ATP). He has held the world no. 1 ranking for a total of 196 weeks. He is the second-highest winner of Grand Slams in numbers with 18 Grand Slam singles titles to date. He has won a record 12 French Open titles, three US Open titles, two Wimbledon titles, and one Australian Open title. He has won 20 ATP Tour 500 titles, 34 ATP Tour Masters 1000 titles, and the 2008 Olympic Gold Medal in singles. He was named the Laureus World Sportsman of the Year in 2011. He was the member of the winning Spain Davis Cup team in 2004, 2008, 2009, and 2011.

What is Rafael Nadal Famous For? 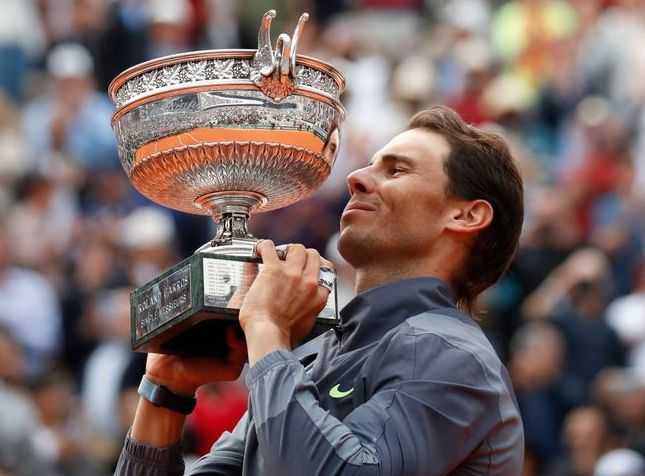 Where was Rafael Nadal Born?

Rafael Nadal’s full name is Rafael Nadal Parera. He was born on 3 June 1986 at Manacor, Balearic Islands, Spain. He is the son of Ana Maria Parera and Sebastian Nadal who is a businessman, owner of an insurance company, glass and window company at Vidres Mallorca and the restaurant at Sa Punta. He has one younger sister named Maria Isabel. He was introduced to tennis when he was three. 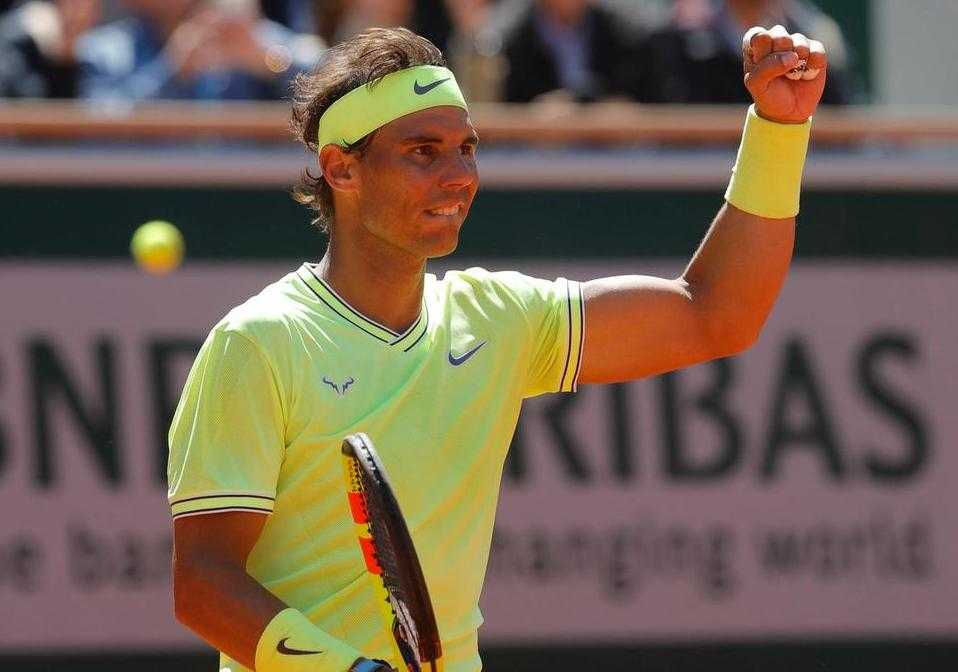 At age 16 in 2002, he reached the semifinals of the Boys' Singles tournament at Wimbledon as his first ITF junior event. He finished the year with a record of 40–9 in singles and 10-9 in doubles. He won 6 singles tournaments. He won his first-ever ATP match in singles.

In 2003, he won two Challenger titles and finished the year ranked No. 49. He won the ATP Newcomer of the Year Award. In his Wimbledon debut, he became the youngest man to reach the third round. He won his first ATP title (doubles or singles) at the clay-court Croatia Open in Umag.

In 2004, he reached the third round of the 2004 Australian Open. He won his first ATP singles title at the Prokom Open. He became the youngest player to register a singles victory in a Davis Cup final. He was ranked No. 51 at the end of the year.

In 2005, he lost the matches at 2005 Australian Open and the 2005 Miami Masters. Later he won 24 consecutive singles matches. He was the first teenager to win a Grand Slam singles title in French Open. He was ranked to No. 3. He became known for his habit of biting the trophies he won. Later he won 16 consecutive matches and three consecutive tournaments which ranked him to No. 2 on 25 July 2005. He won the Golden Bagel Award for 2005. He earned the highest year-end ranking ever by a Spaniard and the ATP Most Improved Player of the Year award. 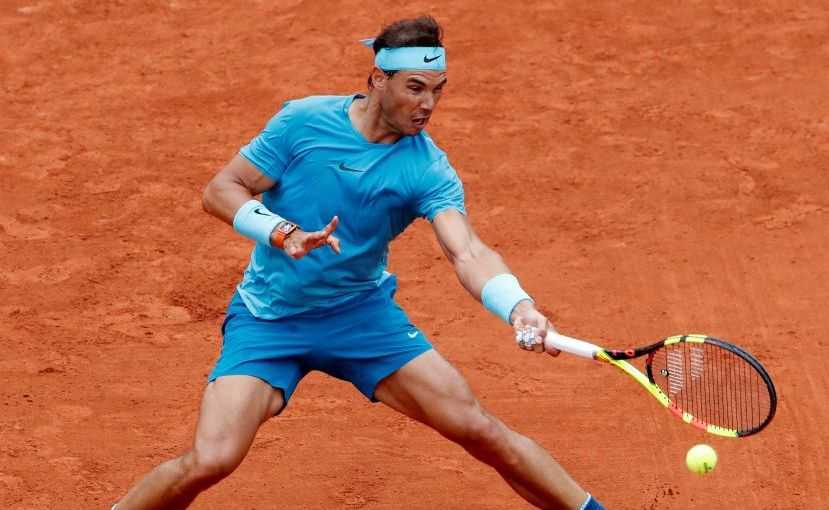 In 2006, he missed the Australian Open due to the foot injury. He won all four tournaments and 24 consecutive matches on European clay. He won the first-round match at the French Open. Vilas presented him a trophy. He won the tiebreaker and became the first to defeat Federer in a Grand Slam tournament final in French Open. He finished the year ranked No. 2.

In 2006, he won the titles at the Masters Series Monte Carlo, the Open Sabadell Atlántico in Barcelona, and the Masters Series Internazionali BNL d'Italia in Rome. He won the French Open for the third straight year. He won consecutive five-set matches during the third and fourth rounds of Wimbledon. He won two of his three round-robin matches of the Tennis Masters Cup in Shanghai. Later he suffered the knee injury.

In 2008, he reached the semifinals of Australian Open for the first time. He reached the final of the Miami Masters for the second time. He won four singles titles. He won his first title at the Masters Series Hamburg. He won the French Open becoming the fifth man in the Open Era to win a Grand Slam singles title without losing a set. He became the fourth male player during the Open era to win the same Grand Slam singles tournament four consecutive years. He became the third man in the open era to win both the French Open and Wimbledon in the same year. He won his second Rogers Cup title in Toronto. At the US Open, he was the top-seeded player for the first time at a Grand Slam tournament.

In 2009, he won his first five matches without dropping a set at 2009 Australian Open. He earned his first hard-court Grand Slam singles title making him the first Spaniard to win the Australian Open. He won his thirteenth Masters 1000 series tournament at 2009 Indian Wells Master. He finished the year as No. 2 for the fourth time in five years. He won the Golden Bagel Award for the third time in 2009. 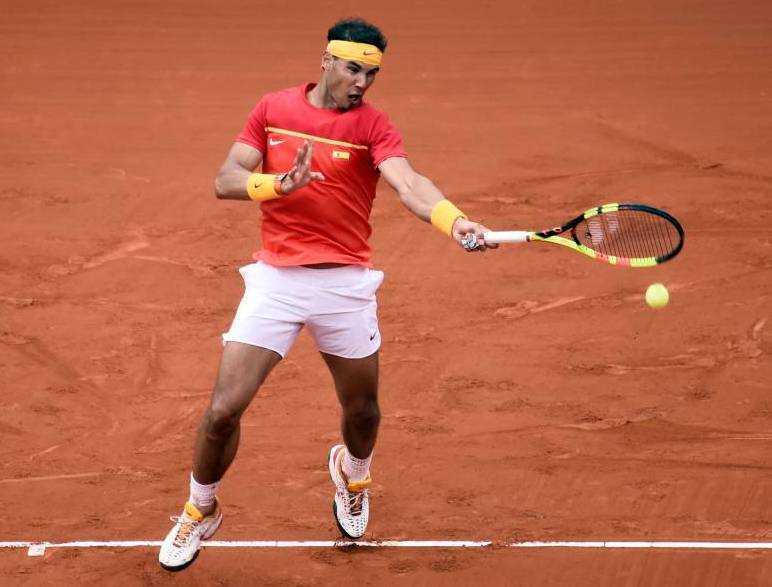 In 2010, he won the Monte-Carlo Rolex Masters. He became the first player in the open era to win a tournament title for six straight years. He won the 2010 Mutual Madrilène Madrid Open. The win gave him his 18th Masters title. He was moved back to No. 2. He won the French Open without dropping a set. He won his second Wimbledon title and his eighth career major title. He was the top seed at the Cincinnati Masters. At the 2010 US Open, he reached his first final without dropping a set. He got the Career Grand Slam. He also became the second male to complete a Career Golden Slam. He also became the first man to win majors on clay, grass, and hard courts in the same year, and the first to win the French Open, Wimbledon, and the US Open in the same year. He also won the Stefan Edberg Sportsmanship Award for the first time. At the 2010 ATP World Tour Finals in London, Nadal won all of his round-robin matches. The year-end No. 1 ranking for 2010.

In 2011, in the Mubadala World Tennis Championship in Abu Dhabi, he won the final. He and countryman López won the doubles title as well. After the US Open, he made the final of the Japan Open Tennis Championships. He was defeated at 2011 ATP World Tour Final.

In 2012, he began at ATP World Tour season at the Qatar Open but lost. In the Australian Open, he won his first four matches without dropping a set. As the clay court season started, he was seeded 2nd at the 2012 Monte-Carlo Rolex Masters. In the final, he topped No. 1. At the 2012 French Open, he won his seventh title at Roland Garros. He became the most successful male player in French Open history. In July 2012, he withdrew from the 2012 Olympics. He ended 2012 ranked No. 4 in the world.

In 2014, he won 2014 season at the Qatar Open in Doha. At the Australian Open, he won the third Australian Open final. He then entered the Wimbledon Championships in a bid to win the tournament for the third time. Later he made the return to the 2014 China Open but was defeated in the quarterfinals. 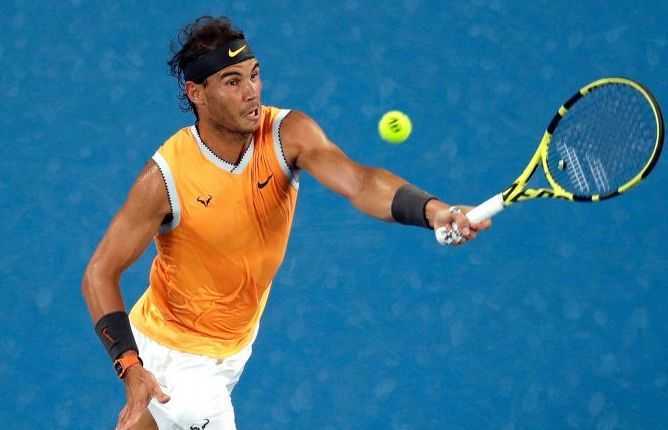 In 2015, he won the doubles title with Juan Mónaco at Qatar Open. At the Australian Open, he began his spring clay season at the Monte Carlo Masters and reached the semifinals. Later he won the 2015 Mercedes Cup.

In 2016, he won Mubadala Title. He won his 28th Masters 1000 in Monte Carlo. He also won his 17th ATP 500 in Barcelona, winning the trophy for the ninth time in his career. At the Rio 2016 Olympics, he achieved 800 career wins with his quarterfinal victory. He won the gold medal in doubles with Marc Lopez. This made him the second man in the open era to have won gold medals in both singles and doubles.

In 2017, he played at the Brisbane International for the first time where he reached the quarterfinals. He began the Australian Open with straight-set wins. He won his 29th Masters 1000 title in Monte Carlo. It was his tenth victory in the principality. He won his 18th ATP 500 title in Barcelona without dropping a set. He won a record tenth French Open title. This marked his first Grand Slam title. He won every set that he played in the tournament. He became second on the all-time Grand Slam titles list, with 15 grand slam championships. He won the China Open final. The year ended as number one. He became the year-end number one for the fourth time in his career.

In 2018, he was dropped to the No. 2 ranking. He won his third Rotterdam Open and overtake the No. 1 position. He won his 11th title in Barcelona. He became the first player in the open era to win 400 matches on both clay and hard. The win marked his 20th ATP 500 series title. It also marked his 14th consecutive season. At the French Open, he won his 17th Grand Slam title. He became just the fourth man in the Open Era to win three or more major titles after turning 30. He was ranked world number one but was seeded second due to Wimbledon's seeding algorithm. He then won his 33rd Masters 1000 Title, Rogers Cup in Canada.

He won the 2019 French Open defeating Dominic Thiem in the final. It was his record 12th French Open title.

Who is Rafael Nadal Married to?

Nadal has been dating long-time girlfriend Maria Francisca (Xisca) Perello since 2005. The couple is planning to get married in 2019.

What is Rafael Nadal Net Worth?

Rafael Nadal has already won the prize money of $109,533,646 as of June 2019. His income comes from winning prize money and endorsements. He has been sponsored by Kia Motors since 2006. He also has clothing and shoe endorsement deals. He has endorsement deals with Nike, Lanvin, AeroPro Drive, Duralat 15L, Quely, Richard Mille RM027, Emporio Armani, Armani Jeans, PokerStars online poker, among others. His net worth is estimated to be $180 million.

Trivias About Rafael Nadal You Need To Know.