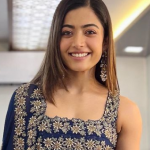 Rashmika Mandanna is an Indian actress who is well known for her works in Telugu and Kannada language films. Referred by the nickname of "Karnataka Crush" by her Kannada fans, she got well-recognized for her hit role as Geeta in the south-Indian movie, "Geetha Govindam".

Having her career initially started with the Kannada film, "Kirik Party"(2016), Rashmika has managed to come a long way becoming one of the most popular actresses in the South film industry.

Recipient of a Filmfare Award South and a SIIMA Award, Rashmika got her biggest hit role as Srivalli in the blockbuster movie, "Pushpa: The Rise"(2021). Her item song, "Sami-Sami" even went on to become one of the hit TikTok songs of 2021.

How did Rashmika Mandanna become famous?

Where is Rashmika Mandanna born?

Rashmika Mandanna was born on April 5, 1996, in Virajpet, Karnataka, India. Her birth name is Rashmika Mandanna. Her nationality is Indian. Her ethnicity is Asian while Aries is her zodiac sign.

Born as one of the two daughters of her parents: Suman Mandanna(father) and Madan Mandanna(mother), she was raised alongside her sister, Shiman Mandanna in Virajpet, a town in the Kodagu district of Karnataka.

Growing up in her hometown, she attended Coorg Public School and later the Mysore Institute of Commerce and Arts. She later got graduated earning a bachelor's degree in Psychology, Journalism, and English Literature from the M. S. Ramaiah College of Arts, Science, and Commerce.

When did Rashmika Mandanna start her career?

Is Rashmika Mandanna in a relationship?

Rashmika Mandanna is currently single and is quite busy in her professional life. She however was in a relationship with co-star, Rakshit Shetty, a popular Indian actor and filmmaker with whom she met while they were on the set making her debut movie, "Kirik Party".

They soon after began dating each other and even got engaged on July 3, 2017, at a private party in her hometown of Virajpet. Just a year later of their engagement, the couple mutually broke off their engagement in September 2018, citing compatibility issues.

She was also rumored to be dating film director, Chiranjiv Makwana.

What is Rashmika Mandanna's salary?

Rashmika Mandanna has earned a handsome sum of money from her profession as an actress. Having her acting career started in 2016, Rashmika has marched towards success and has progressed to become one of the most well-known Indian actresses.

She has acted in several films for which she has received a large quantity of money. Many of her movies have joined 100 crore rs. blockbuster movie list marking her high salary.

She also makes additional income from her endorsement deals with many renowned brands. Including her earnings and incomes, she has a net worth estimated to be around $3 million as of 2022. She has expensive car collections as well including Mercedes Benz C Class, Toyota Innova, and Audi Q3.

Rashmika Mandanna is a gorgeous lady with a well-maintained hourglass body physique in her 20s. She stands tall with a height of 5ft 6inches(1.67m) and has a body weight of 60kg(132 lbs).

Her body measurement is 33-25-34 inches. Her shoe size is 8(US) with 4(US) as her dress size. She has a fair complexion with black hair and a pair of brown eyes.

Trivias About Rashmika Mandanna You Need To Know.