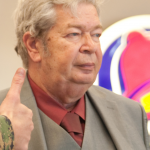 Richard Benjamin Harrison Jr. was an American Businessman and reality television star best known as one of the stars of the History Channel reality series Pawn Stars. Who is mainly popular as the co-owner of the World Famous Gold & Silver Pawn Shop. He is  known by the nicknames The Old Man and The Appraiser.

Richard Harrison attended Lexington High School, but left after  grade 10. Harrison's family was poor, and to make money, Harrison drove a school bus when he was 14.

As a teenager, he was ordered to enlist in the military rather than go to jail for stealing a car.

He married JoAnne Rhue Harrison in 1960. His son Rick Harrison is the co-owner of the World Famous Gold & Silver Pawn Shop.