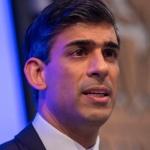 Rishi Sunak is a British politician. A member of the Parliament for Richmond (Yorks) since 2015, he served as the Chief Secretary to the Treasury from 2019 to 2020 and Chancellor of the Exchequer from 2020 to 2022. In July 2022 he announced his candidacy to replace Borish Johnson in the Conservative party leadership election. He is seen as the favorite to become the next Prime Minister and leader of the Conservative Party.

What is Rishi Sunak Famous For?

Where is Rishi Sunak From?

Rishi Sunak was born on 12 May 1980. He was born in Southampton in England. He holds English nationality. He was born to Hindu Punjabi parents, Yashvir and Usha Sunak. His father was born and raised in the Colony and Protectorate of Kenya and his mother was born in Tanganyika (which later became part of Kenya). He has two younger siblings, Sanjay and Raakhi. His brother is a psychologist and his sister is the Chief of Strategy and Planning at Education Cannot Wait, the United Nations' global fund for education. His grandparents were born in Punjab Province, British India, and migrated from East Africa with their children to the UK in the 1960s. He belongs to the Indian ethnicity and his religion is Hindu. His zodiac sign is Taurus.

Regarding his educational background, he attended Stroud School in Romsey, Hampshire. He later attended Winchester College. During his summer holidays, he worked as a waiter at a curry house in Southampton. He then studied Philosophy, Politics, and Economics (PPE) at Lincoln College, Oxford. He graduated with a first in 2001. He obtained his MBA from Stanford University in 2006. He was a Fulbright scholar.

Who is Rishi Sunak Wife?

Rishi Sunak is a married man. He is married to Akshata Murty, the daughter of the Indian billionaire N. R. Narayana Murthy, the founder of Infosys. The two first met while studying at Stanford University. They got married in August 2009 and share two daughters. Akshata Murty is one of the wealthiest women in Britain and owns a 0.91% stake in Infosys and owns shares in two of Jamie Oliver's restaurant businesses, Wendy's in India, Koro Kids, and Digme Fitness.

She is also the director of her father's investment firm, Catamaran Ventures. Sunak's wife, Akshata drove controversy when she was found avoiding paying an estimated £20 million in UK taxes and was paying only £30k to secure her non-domiciled status. Following the controversy, she announced that she would pay UK taxes on her global income.

They live at Kirby Sigston Manor in the village of Kirby Sigston, near Northallerton, North Yorkshire. It was reported in April 2022 that Sunak and his wife moved out of 11 Downing Street to a luxury West London home. They also own a mews house in Kensington in central London, a flat on Old Brompton Road, London, and a penthouse apartment in Santa Monica, California. 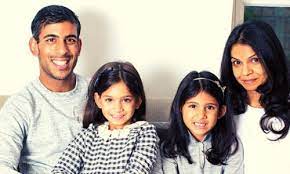 What is Rishi Sunak Height?

What is Rishi Sunak Net Worth?

Rishi Sunak and his wife Akshata have a combined net worth of £730 million. They were placed at 222nd in the Sunday Times Rich List 2022. He is the first frontline politician to join the rich list. His wife is a businesswoman who has several business ventures.