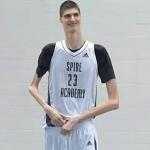 Robert Bobroczky is a famous Hungarian basketball player who has drawn the attention of the people throughout the world for his exceptional height of 7ft 7inches(2.31m). He currently plays basketball for SPIRE Institute in the United States. Tallest Basketball Player in the World.

What is Robert Bobroczky famous for?

When was Robert Bobroczky born?

Robert Bobroczky was born on 17th July 2000 in Arad, Romania. His birth name is Robert Bobroczkyi. Romanian is his nationality. His ethnicity is Romanian-Hungarian. Cancer is his zodiac sign.

When he was 8 years old, he became taller than his mother by 1 inch and he surpassed his father's height by the age of 12 by being 7ft 2 inches tall.

He has become the subject of medical science since his childhood due to his exceptional height. It leads to the opinion that his height is a result of genetics.

His huge height encouraged him to play basketball and he started playing basketball from his school days.

- Robert Bobroczky started his basketball career in the year 2014 as a junior player. He was recruited by A.S Stella Azzura, a junior-level basketball club.

- He won his first title, "Under 15 championship" with his club. He became an important part of the club.

- In 2016, he became very popular throughout the world due to a video where he was dominating a much shorter competitor during a game with Stella Azurra.

- He attended prep school SPIRE Institute in Geneva, Ohio, the US in 2016.

How is Robert Bobroczky's personal life?

The tallest teenager, Robert Bobroczky is not married. He is also not in any relationship. He seems to be focusing more on his career than his personal life.

What is the net worth of Robert Bobroczky?

How tall is Robert Bobroczky?

The 18 years aged, Robert Bobroczky has maintained his body very well. Being the tallest teenager in the world, he stands at a height of 7ft 7 inches(2.31m) and his body weight is 100kg(220lb). He has a fair complexion with black eyes and brown hair. His shoe size is 17(US).