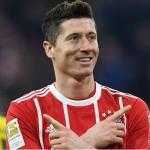 Robert Lewandowski is a Polish professional football player playing for Barcelona and Poland National Team as a forward. He is also the captain of the Poland national team. At present, he is considered one of the prolific goalscorers of this generation. In 2015, the Guardian has ranked him as the fifth best footballer on the planet. Lewandowski's senior career started from Znicz Pruszkow 2006-08, Lech Poznan 2008-10, Borussia Dortmund 2010-14, Bayern Munich 2014-22 to Barcelona since 2022. Lewandowski has proved his worth for all the clubs he played for. Lewandowski made his international debut for Poland in 2008. He is the all-time top scorer for Poland with 76 goals over 130 caps. He has received the Polish Player of the Year a record ten times.

Robert Lewandowski was born on 21 August  1988, in Warsaw, Poland. He belongs to the Polish nationality. Likewise, his religion is Catholic and as per his birth date, his zodiac sign is Leo. His father, Krzysztof was a Polish Judo champion and ex-footballer. His father played for Hutnik Warszawa in the second division. His mother, Iwona is a former volleyball player for AZS Warszawa. Later she became the vice-president of Paryzant Leszno. He has a sister, Milena, who is a volleyball player. She represented the U21 national volleyball team.

Lewandowski started his youth career at MKS Varsovia in 1997. He played for seven years for the club until 2004. He then played for Delta Warsaw and Legia Warsaw in the 2004-05 and 2005-06 seasons respectively. Lewandowski became the top scorer in the Polish third division and Polish second division in the 2006-07 and 2007-08 seasons respectively. Lech Poznan signed Lewandowski in June 2008 for a transfer fee of 1.5 million zlotys. He made his debut and also scored for the Lech in July 2008 against Khazar Lankaran in the first round of the UEFA Cup qualifier. Lewandowski played at Lech for two seasons and finished second top goal scorer in his debut season, and became the top scorer in the following season. Also, Lewandowski helped his team to win the 2009-10 championship.

Following his success at Lech Poznan, Bundesliga club Borussia Dortmund signed Lewandowski in June 2010 on a four-year contract for 4.5 million Euro. Lewandowski scored his first goal for the club against Schalke 04 on September 19, 2010. Lewandowski finished the 2011-12 season Bundesliga as the third top goal scorer with 22 goals and six assists, when they became the league champion. He also scored a hat-trick against Bayern Munich in the DFB-Pokal Final. He became the top scorer in DFB-Pokal with seven goals from six games. Dortmund won the league and cup double in the same year.
Lewandowski became the first player to score four goals in a Champions League semi-final on April 24, 2013. Lewandowski scored all of four goals for Dortmund in a 4-1 win over Spanish champions Real Madrid in the first league. Dortmund lost 2-1 to Bayern Munich in the UCL final.
Lewandowski finished the 2013-14 season as the top scorer in the Bundesliga with 20 goals and 28 goals in total in all competitions.

Following his successful career at Borussia Dortmund, Bayern Munich showed interest on Lewandowski. Bayern Munich officially signed him on a five-year deal on January 3, 2014. Lewandowski made his competitive debut for Bayern against his former club Borussia Dortmund in the 2014 German Super Cup on August 13, 2014. Bayern lost 2-0 to their rivals. Lewandowski scored his first competitive goal for the club against Schalke 04 on August 30. Lewandowski finished his debut season scoring 25 goals for Bayern in all competitions, joint-second top scorer alongside teammate Arjen Robben in the Bundesliga. Lewandowski also won the League with Bayern in his first season.

During his second season at Bayern, Lewandowski set a Bundesliga record by coming on as a substitute and scoring five goals in 8 minutes and 59 seconds against Wolfsburg. It also became the fastest record in any of the major European football leagues. He also set the fastest hat trick record in Bundesliga, with three goals in four minutes. For these records, Lewandowski received four Guinness World Records certificates as well. Lewandowski finished the season with 42 goals in all competitions.

He finished the 2017-18 season as the top goalscorer for the third time with 29 goals in Bundesliga. He scored 41 goals in all competitions. The same season, he also reached the top ten highest goalscorers in the Bundesliga. He also equaled the record of scoring in 11 successive home games in a single season with Jupp Heynckes.
He won Bayern Munich German Super Cup for a record seven times on August 12, 2018, and became the all-time top scorer in German Super Cup history.

On 19 July 2022, he signed for La Liga club Barcelona on a four-year contract for a fee of €45 million, potentially rising to €50 million with add-ons. The contract includes a release clause set at €500 million.

Initially, Lewandowski played for Poland's U21 team. Lewandowski made his senior debut against San Marino in the 2010 FIFA World Cup qualification game on September 10, 2008. Lewandowski scored his debut goal for the country in his debut game. Lewandowski's Poland, co-hosts of the 2012 UEFA Euro crashed out of the group stage. Lewandowski played his first match as a captain for the national team against San Marino on March 26, 2013, during the 2014 World Cup qualifying game. Lewandowski scored his first international hat trick, netting four goals against Gibraltar on September 7, 2014, during UEFA Euro 2016 qualifier. Lewandowski scored a hat-trick within four minutes against Georgia on June 13, 2015. Lewandowski led his team to UEFA Euro 2016 quarterfinals for the first time in history. Poland lost to eventual winners Portugal in the semifinal in a penalty shootout. Lewandowski finished the 2018 FIFA World Cup qualification campaign with a record high for a European with 16 goals. Lewandowski was called up to the 23-man Polish squad for the 2018 FIFA World Cup in Russia. Lewandowski's Poland did not make it to the last 16 in the World Cup. In May 2021, he was included in Poland’s squad for the UEFA Euro 2020 where Poland finished last in their group and was knocked out from the group stages. Since his debut, he has obtained 132 caps and scored 76 goals for Poland. With 76 international goals, Lewandowski is the all-time top scorer for Poland and the third overall men's international goalscorer in Europe, only behind Ferenc Puskás (84) and Cristiano Ronaldo (117).

Who is Lewandowski's Wife?

Looking at his personal life, Lewandowski is a married man. He got married to his beautiful girlfriend, Anna Lewandowska on 22 June 2013 in the Church of the Annunciation of the Blessed Virgin Mary in Serock. The couple started dating back in 2008, while Lewandowski was with Lech Poznan. His wife, Anna Lewandowska is a Karate Player and won the bronze medal at the 2009 Karate World Cup. The coupled is blessed with two daughters: their first daughter named Klara was born in May 2017 and their second daughter named Laura was born in May 2020. He usually shared a couple of pictures with his wife and daughters on his social media accounts. At present, he has an intimate relationship with his wife and daughters where they are living their life happily together.

What is the Net Worth Lewandowski?

Lewandowski is a very talented football player and with his continuous hard work and dedication, he has accumulated a huge amount of money from his football career which is his major source of wealth. He is a Polish professional footballer who currently plays as a striker for La Liga club Barcelona. In June 2008, Lech Poznań signed Lewandowski from Znicz for 1.5 million PLN. In July 2010, he joined Bundesliga club Borussia Dortmund, signing a four-year contract with the German club for a fee reported to be worth around €4.5 million. In July 2022, he signed for La Liga club Barcelona on a four-year contract for a fee of €45 million, potentially rising to €50 million with add-ons. The contract includes a release clause set at €500 million. As of 2022, the net worth of Lewandowski is believed to be €177 million where he received £7.6 million as a yearly salary from his current club. Besides this, he also earns a decent amount of money from sponsorship, salary from the national team, and endorsement deals with various brands including Nike, Opel, EA Sports, CoverGirl, and Oshee which amount to $1 million. He owns a luxurious home in Germany and a second residence in Warsaw, Poland. Supercars like the Ferrari F12 Berlinetta, Porsche 911 Speedster, Maserati GranTurismo Sport, Audi RS6, and two Bentley Continentals are among his collection of automobiles. As of now, he is satisfied with his earnings and is living a luxurious lifestyle.

How tall is Lewandowski?

Lewandowski stands at the height of 1.85m i.e. 6 feet and 1 inches tall. He has a bodyweight of 81kg. Moreover, he has an athletic body build. His eye color is grey and his hair color is black. His chest size is 40 inches, his arms size is 14 inches and his waist size is 31 inches. Overall, he has got a healthy body with a charming personality. In addition, his sexual orientation is straight.

Trivias About Robert Lewandowski You Need To Know.