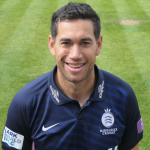 What is Ross Taylor famous for?

What nationality is Ross Taylor?

Ross Taylor was born on 8 March 1984. His birth name is Luteru Ross Poutoa Lote Taylor. His birthplace is Lower Hutt, Wellington, New Zealand. He was born to his father, Neil Taylor, and his mother, Ann Taylor. He is of part-Samoan descent, his mother being from the Samoa village of Saoluafata, and also has family connections to Fasito'o-Uta. His father is from New Zealand.  He attended Palmerston North Boys High School and Wairarapa College. He was a hockey player before shifting his focus to cricket. He holds New Zealand nationality. His religion is Christianity. His horoscope sign is Pisces.

Who is Ross Taylor's wife?

Looking at his personal life, he is a married man. He got married to his long-time girlfriend, Victoria Jayne Brown on 25 June 2011. Together, the couple is blessed with three children: two daughters and a son. He has an intimate relationship with his wife and children where they are living their life happily together.

Ross Taylor stands at a height of 1.83m i.e. 6 feet and 0 inches tall. He has a bodyweight of 70kg. He has an athletic body build. His eye color is dark brown and his hair color is light brown. His sexual orientation is straight.

Ross Taylor earns from his professional career as a cricket player. His income is from contracts, salaries, bonuses, and endorsements. As of 2021, his estimated net worth is around $1 million $5 million.