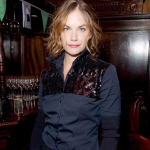 Ruth Wilson is an English actress, model, show host, and producer. She is known for her performances in Suburban Shootout (2005), Jane Eyre (2006), as Alice Morgan in the BBC TV psychological crime drama Luther (2010–2013, 2019),[2] as Alison Lockhart in the Showtime drama The Affair (2014–2018), and as the titular character in Mrs. Wilson (2018). Her film credits include The Lone Ranger (2013), Saving Mr. Banks (2013), I Am the Pretty Thing That Lives in the House (2016), and Dark River (2017). Wilson is a two-time Olivier Award winner, for the category of the Best Actress in Anna Christie(2012), and the Best Supporting Actress in A Streetcar Named Desire(2010). She has won a Golden Globe for her role in The Affair(2014) and received several other nominations for other prestigious awards.

What is Ruth Wilson famous for?

Who are Ruth Wilson's parents?

Ruth is the daughter of Nigel Wilson, an investment banker, and Mary Metson, a probation officer. Wilson was born in Ashford, Surrey, England on 13 January 1982. She has three older brothers: Toby, Sam (a BBC journalist) and Matthew. Wilson grew up in Shepperton, Surrey, and was raised as a Catholic. She belongs to mixed ethnicity, English, Scottish and Irish. Her nationality is British and her zodiac is Capricorn. As a teenager, she worked as a model. Wilson attended Notre Dame School in Cobham and Esher College. She graduated in history at the University of Nottingham in 2003. She was also a drama student at the Nottingham New Theatre. She then graduated from the London Academy of Music and Dramatic Art (LAMDA) in July 2005. During her time at Nottingham, she participated in the TV war strategy game Time Commanders, helping her teammates fight in the Battle of Pharsalus. Out of her passion for acting and drama, she co-founded Hush Productions with a couple of her friends in the early days.

How is Ruth Wilson's career?

Initially, she worked as a model during her teenage. Wilson made her Television debut from the BBC4 strategy game show, Time Commanders in 2003. She made her professional TV debut from the TV series, Suburban Shootout in 2005. She got wide fame after she played the role of Jane Eyre in series, Jane Eyre in 2006. Her other notable roles include, as Alice Morgan in the BBC TV psychological crime drama Luther (2010–2013, 2019), as Alison Lockhart in the Showtime drama  The Affair (2014–2018), and as the titular character in Mrs. Wilson (2018). Wilson made her film debut from a short film, Get Off My Land in 2007. Her film credits include The Lone Ranger (2013), Saving Mr. Banks (2013), I Am the Pretty Thing That Lives in the House (2016), and Dark River (2017).

Wilson was an executive producer for 2018's film, The Little Stranger. She has also done theatrical performances which include, Philistines(2007), Through a Glass Darkly(2010), Hedda Gabler(2016-2017), King Lear(2019) and few other more. Besides, she is an occasional show host who has presented the 2007 Lilian Baylis Awards. She also has narrated and presented the BBC4 and BBC3 radio programs like The Mayor of Casterbridge(2008), The Promise(2009), The Lady of the Camellias(2009) and Spitfire! (2010). Wilson has a lead role in 2019's fantasy drama series, His Dark Materials. Throughout her career, Wilson has earned two Olivier Awards, a Golden Globe Award and multiple nominations for the same and in other various distinguished categories.

What is Ruth Wilson's net worth?

The British actress, Ruth Wilson has an estimated net worth of $3 million. Her current average salary is still not known. Her major source of income is her profession as an actress. She is a widely famous actress as Alice Morgan from BBC TV  popular TV series, psychological crime drama, Luther (2010–2013, 2019). She has been involved in the entertainment industry for one and a half decades now so she has been able to heap this current net worth. Also, she earns from many TV commercials, endorsements, and guest appearances. Further information regarding her cars and houses are still under review.

Who is Ruth Wilson's husband?

Ruth is not married yet and is currently single. She is not dating anyone for now. But she definitely has some dating history in past years. Her recent rumors were she was dating actor Jake Gyllenhaal as they would frequently see together. However, they never confirmed nor denied their communion. Before that, she was in an intense relationship with Jude Law, an actor. The couple began dating in 2012. They broke up reportedly in 2014. Ruth has also dated Joshua Jackson. Ruth does not have any children to date from her any relationships.

What age is Ruth Wilson?

The 37-year-old Showtime drama, The Affair, the star has a decent height of 5 feet 6 inches. Even with such age she is very slim and has maintained body shape. She weighs around 55 kg. Moving on, her hair color is light brown and her eyes are blue. The well-recognized character, Alice Morgan in the BBC TV psychological crime drama Luther has a body measurement of 32-24-34(breast-waist-hip) inches. Her bra size is 32A. Likewise, she fits in dress size 2(US) and puts on the shoe size of 8(US). Wilson has a straight sexual orientation.