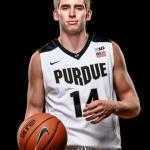 Ryan Cline is an American basketball player. He currently plays for the Purdue Boilermakers men's basketball team of the Purdue University that competes in NCAA Division I. He plays in the guard position. He played high school basketball at the Carmel High School.

The No. 3 seed Purdue Boilermakers has now advanced to the Elite Eight for the first time since 2000. The Boilermakers will face top-seeded Virginia. They defeated Tennessee 99-94 in the overtime in the Sweet Sixteen. Ryan Cline and Carsen Edwards had one of their amazing matches scoring a total of combined 56 points. The senior guard Cline scored 7 three-pointers out of 27 points he scored for the Boilermakers.

Ryan Cline was born on 10 April 1997. He was born to a father,  Mike Cline, and a mother, Micki Cline. His birth place is in Carmel, Indiana in the United States. He holds American nationality. His father played basketball at Ohio State and captained the Buckeyes as well. He grew up in Carmel, Indiana.

He attended Carmel High School in Carmel, where he played his high school basketball.

He averaged 16.9 points per game as a junior. He helped the Carmel to claim the 2013 Indiana 4A State Championship.

He gained national attention when he earned MVP honors of the Adidas Super 64 tournament. He led his team to AAU circuit title.

He was named the MIC Conference Player of the Year in 2015.

He enrolled at Purdue University, where he is majoring in organizational leadership.

He committed to play for Purdue Boilermakers of the Purdue University.

He tied with Robbie Hummel for the fourth-most trifectas by a freshman in school history making 42 out of 109 3-pointers.

His 42 3-pointers were also the third most by a Big Ten freshman. He was also the 1 of 2 players to make 40 or more 3 pointers and three or fewer 2 pointers.

He became the third player in school with 100 triples in a season.

Who is Ryan Cline Dating?

Ryan Cline is unmarried. But he is not single. He is in a relationship. The identity of his girlfriend is not available at present. The detail information regarding his personal life will be updated soon.

What Are Ryan Cline's Body Measurements?

What is Ryan Cline's Net Worth?