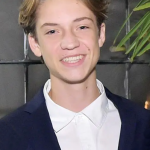 Ryder Robinson is an American celebrity kid. He is the eldest son of Golden Globe-winning American actress Kate Hudson. She is best known for her performance in the 2000 film "Almost Famous" for which she was nominated for the Academy Award for Best Supporting Actress. His father is Chris Robinson, who founded the rock band The Black Crowes with his brother Rich Robinson in 1984.

Being a Celebrity kid, he has also gained popularity on social media. He has 96.2k followers on his Instagram account @mr.ryderrobinson. Robinson frequently appeared in his mother's Instagram videos and live sessions. Recently, his romantic connection with another celebrity kid star Iris Apatow has been making headlines in several national newspapers and internet sites.

What is Ryder Robinson famous for?

Who are Ryder Robinson's parents?

Ryder Robinson was born on 7th January 2004 in Los Angeles, California, the US. He was named Ryder Russell Robinson at the time of his birth. By nationality, he is an American and belongs to mixed ethnicity. Capricorn is his star sign. He practices Buddhism like his mother.

Robinson comes from a well-established family with a good connection to the American film industry. His mother Kate Hudson is an actress by profession while his father Chris Robinson is an American musician. From his mother's second and third marriage, he has a younger half-brother Bingham Hawn Bellamy and a little sister Rani Rose Hudson Fujikawa.

After completing his middle-level education, Robinson attended Crossroads High School in Westlake Village, California in 2019, from where he will be going to graduate in 2022.

Who is Ryder Robinson dating?

Robinson is currently dating actress Iris Apatow. Apatow is a 19-years old daughter of American actress Leslie Mann and Judd Apatow, a comedian, director, producer, and screenwriter. The pair seem to have a deep connection of love between them. The duo first confirmed their relationship on Valentine's day on 14th February 2022 with a series of social media snaps posted on their Instagram.

After Iris Apatow and Ryder Robinson went public with their relationship, their moms Leslie Mann and Kate Hudson shared their approval on social media. Kate seemed overjoyed by her son's growing relationship. Iris' family also seems to support the coupling. Rumors have been surfaced that two teens were an item since August when Kate began leaving cryptic messages on Iris' Instagram posts.

At the time of writing, there are no reports and data which reflect Robinson's earnings and net worth.  Moreover, our celebrity kid is still studying in high school and hasn't started working professionally. He will be earning a decent amount of income once he completes his studies and gets involved in his professional career. On the other hand, his mother Kate has a net worth of $80 million while his father Chris is worth $9 million.

How tall is Ryder Robinson?

Ryder Robinson is around 5 ft 9 inches tall which means he is 3 inches taller than his mom who stood at a height of 5 ft 6 inches tall. He has a bodyweight of 58 Kg (Approx.). He looks cute and handsome, the features he inherited from his beautiful mother Kate. He prefers to have a side-parted hairstyle that is blonde in color. His eyes color are light brown.