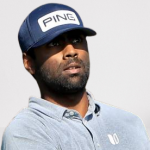 Sahith Theegala is an American Professional Golfer who currently plays on the PGA Tour. He was a three-time NCAA All-American at Pepperdine University. In 2020, Theegala won the Haskins Award, the Ben Hogan Award, and the Jack Nicklaus Award, becoming just the fifth person ever to win all three awards in the same year.

He is Pepperdine’s first National Player of the Year and its third three-time All-American. In four playing seasons over five years, he ended with the best scoring average (70.61) in Pepperdine history. He also set the Pepperdine career record for below-par rounds and tied the records for wins. He was the Four-time All-Region and three-time All-WCC first team.

What is Sahith Theegala famous for?

What nationality is Sahith Theegala?

Sahith Theegala was born on 4th December 1997 in Orange, a city located in Orange County, California, the US. His birth name is Sahith Theegala. He holds an American nationality and belongs to the Indian-American ethnic group. His birth sign is Sagittarius. He is a follower of Christianity.

Theegala was born into a middle-class Indian family. His father Muralidhar Theegala was a tennis player who moved from India to the United States in 1987. His mother Karuna Theegala, a housewife is a cancer survivor. He was raised by his grandmother Vijaya Laxmi along with his younger brother Sahan.

Theegala graduated from Diamond Bar High School, a public school in Diamond Bar, California in 2015. He is currently Majoring in sports administration from the Pepperdine University of California. He chose this university due to its excellent golf facilities and had amazing coaches, along with good academics.

If we take a glimpse at Theegala's social media accounts like Instagram, Facebook we cannot trace or find any proof regarding his girlfriend or any link with the girl. In every photo and video posted by him, we can only find him clicking photos of himself or with his family and teammates.

As of February 2022, the net worth of Sahith Theegala is estimated to be $500 thousand. He accumulates his wealth through his professional golf career by participating in big events and competitions Golf. He earns an average salary of $200k-$300k per year.

Sahith Theegala's best year was 2021-22 where he earned $223,930. He also earns big bucks from his endorsement deal with Ping, an American sports equipment manufacturing company based in Phoenix, Arizona.

Sahith Theegal has an Indo-Aryan look with a dark complexion and athletic build body. He has a height of 6 ft 3 inches tall and his body weight is 75 Kg. He has short black hair and dark brown eye. As a Golf player, he regularly does workouts and Jogging to keep him fit and active.

Trivias About Sahith Theegala You Need To Know.