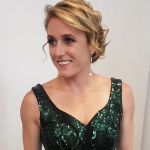 She is the 2011 and 2017 World champion and 2012 Olympic champion in the 100 meters hurdles. She also won a silver medal in the 100 m hurdles at the 2008 Summer Olympics and the 2013 World Championships. On 5 August 2019, Pearson announced her retirement from competitive athletics, stating that she did not believe that she would be ready for the 2020 Olympic Games.

Currently, she is serving as a sports presenter at 7NEWS Gold Coast which she joined on 20th February 2022. In some exciting personal news, Sally also revealed she and husband Kieran are adding to their family with a sibling for daughter, Ruby, due in August 2022.

What is Sally Pearson famous for?

Where was Sally Pearson born?

Sally Pearson was born on 19th September 1986 in Sydney, Australia. Her parents named her Sally McLellan at the time of her birth. She holds an Australian nationality and belongs to the white Caucasian ethnicity. Her star sign is Virgo. She is a follower of Christianity.

Pearson was born into a middle-class family. There is no information about her father, but her mother's name is Anne McLellan. It is said that her parents separated when she was very small. It was her mother who raised Pearson and her siblings. She used to work two jobs to support her daughter's athletic career.

After completing her middle-level education, Sally Pearson went to Helensvale State High School on Queensland Gold Coast from where she graduated in the mid-2000s.

Sally Pearson has been married to her handsome husband Kieran Pearson since 2010. The couple first met in the early 2000s while studying at Helensvale State High School on Queensland's Gold Coast. They began dating in their senior year at their High school. At first, they were friends but their close friendship ended in their romantic relationship which was their love destiny.

After dating for several years, the love birds became engaged in late 2008. In April 2010 they married on the Gold Coast and had their honeymoon in Los Angeles and Hawaii. In July 2020, The couple welcomed their first child, a baby girl, whom they named Ruby Elizabeth. The 35-year-old, Sally made the announcement with a picture of the happy family after Ruby's birth in hospital.

As of February 2022, the net worth of Sally Pearson is estimated to be US $1.9 million. She has accumulated her fortune through her successful Athletic career.  In 2011, while she was awarded Female Athlete of the year, Pearson also received $100,000 as prizemoney. Furthermore, she also adds a decent sum to her net worth through endorsements deals with various brands including Addidas.

How tall is Sally Pearson?

Sally Pearson is 5 ft 6 inches tall and her body weight is 60 Kg. She has an Athletic build rigid hourglass-shaped body. As being an Athlete, she regularly does exercise, workouts, and jogging which has given her a perfectly toned body that resembles sportsman-like. She has got a medium-cut hairstyle middle-parted hairstyle that is blonde in color and her eye color is black.

Trivias About Sally Pearson You Need To Know.