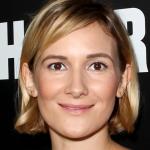 Sarah Solemani is an English actress, writer, and activist, who is well-recognized for her starring role as Becky in the BAFTA-winning sitcom, "Him & Her"(2010-13). For her role, she even won Best Comedy Performance at the Royal Television Society awards in 2011.

Known for her role as Miss Gulliver in the British comedy TV series, "Bad Education" and "The Bad Education Movie", she was named one of the year's Broadcast Hot Shots in 2012.

She is also known for her role as Miranda in Working Title's "Bridget Jones's Baby" and has been a champion for sex worker rights since 2002. Besides, she is active on the social media platform with around 43k followers on her verified Twitter account: @Solemani.

What is Sarah Solemani famous for?

Where was Sarah Solemani born?

Sarah Solemani was born on September 4, 1982, in Camden, London, England. Her birth name is Sarah Solemani. She holds an English nationality. Her ethnicity is mixed(Persian-Jewish and Northern Irish) while Virgo is her zodiac sign.

Born as the daughter of Akiva Solemani(father) and Rachel Solemani(mother), she was raised in Crouch End where she attended Henrietta Barnett School, graduating earning an A levels degree. She was good in academics that she studied Human, Social, and Political Sciences Tripos at New Hall, Cambridge later graduating with an MA(Hons).

Soon later, she joined the Cambridge University Footlights Dramatic Club during which she even became the social secretary during her first year and then vice president.

Her father, Akiva worked as a mathematics lecturer back then however, her mother died when she was only 16. Besides, she was even a member of the National Youth Theatre back then.

Who is Sarah Solemani's married?

Sarah Solemani is a married woman and has been married just once to date. Her first and only husband is Daniel E. Ingram. Ingram is an American sustainable investment expert specializing in climate change with whom she got married in Petah Tikva, Israel, on June 3, 2012.

The couple has been married for over a decade now and even have formally converted to Judaism together. They are blessed with two children: a daughter, Soraya Rae born in December 201,3, and a son born in May 2018.

Besides, she has been a champion for sex worker rights since 2002 and is against the criminalization of sex work.

How much is Sarah Solemani worth?

Sarah Solemani has earned a good amount of money from her profession as an actress, writer, and activist. Having her career started with the play character of Elaine in her early 20s, she has managed to come a long way becoming one of the TV actresses winning several awards.

Including all of her earnings, Emilia has an estimated net worth of $2.5 million as of 2022.

How tall is Sarah Solemani?

Sarah Solemani is a beautiful lady with a well-maintained hourglass body physique in her early 0s. She has a fair complexion with black hair and a pair of black eyes. She stands tall with a height of 5ft 5inches and has a bodyweight of 56kg.