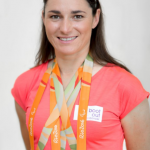 Sarah Storey is a British Paralympic cyclist as well as a former swimmer who has won multiple gold medal winner at the Paralympic Games in both sports, and six times British (able-bodied) national track champion (2 × Pursuit, 1 × Point, 3 × Team Pursuit). Her total of 27 Paralympic medals including 16 gold medals makes her the most successful British Paralympian of all time as well as one of the most decorated Paralympic athletes of all time. She began her Paralympic career as a swimmer, winning two golds, three silvers and a bronze in Barcelona in 1992. She made her maiden appearance at the Paralympics in 1992 at the age of 14. Her major achievements include being a 29-time World champion (6 in swimming and 23 in cycling), a 21-time European champion (18 in swimming and 3 in cycling) and holding 75 world records. She is regarded as one of the most experienced campaigners in the history of the Paralympics as she took part at the Paralympics on eight occasions in 1992, 1996, 2000, 2004, 2008, 2012, 2016 and 2020. She is a current para world record holder in women's 3000m individual pursuit and hour record. During the qualifying heat event at the 2020 Summer Paralympics, she also incredibly shattered her own world record by four seconds in the individual pursuit C5 category. She won The Sunday Times Disability Sportswoman of the Year in 2020 and was officially announced in an online ceremony.

Becoming Great Britain's joint most successful Paralympian of all time was a "dream come true" for Sarah Storey after she won her 16th gold medal in the C5 time trial in Tokyo. The 43-year-old, appearing at her eighth Paralympic Games, tied the record held by swimmer Mike Kenny. She dominated the time trial, winning by 92 seconds as British team-mate Crystal Lane-Wright took silver. Storey has the opportunity to win the 17th gold in Thursday's road race. "I never set out on this journey to be Britain's greatest Paralympian but to match the best man and to have more other medals is just a dream come true," said Storey, who has now won 27 Paralympic medals. "The course is super quick. The corners were really grippy and I rode a really good line and carried speed. I got caught up in a bit of traffic at times perhaps as I was going a bit quicker than they had anticipated. "I am just so chuffed. I have been preparing for this for such a long time. There have been so many parts to it, both my bike and physical preparations." Storey made her Paralympic debut at the 1992 Games in Barcelona, winning her first five gold medals in swimming before switching to cycling. The 43-year-old, who won individual pursuit gold earlier in the Tokyo Games, finished the time trial in a time of 36 minutes 8.90 seconds. Lane-Wright won her second silver medal of the Games, finishing 54 seconds ahead of Germany's bronze medallist Kerstin Brachtendorf.

What makes Sarah Storey so famous? 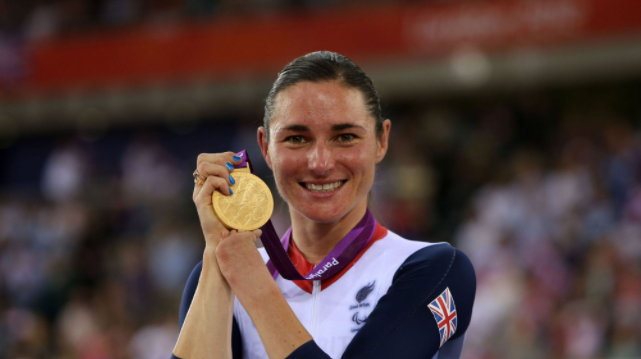 Where is Sarah Storey From?

Sarah Storey was born on 26th October 1977 in Eccles, England with the birth name of Dame Sarah Joanne Storey. He holds British nationality and his ethnic background is British-White. His race is White. His present age is 43 as of 2020. Sarah Bailey was born in Manchester without a functioning left hand after her arm became entangled in the umbilical cord in the womb and the hand did not develop as normal. As a schoolgirl, she was subjected to bullying by her schoolmates and also faced eating disorder issues at school. She joined her first swimming club at the age of ten and was told by her coach that she had started her training too late to be good at anything. Scorpio is his Zodiac sign and his religion is Christian. Sarah has not spoken anything about her parents and siblings.

About her education, Sarah Storey graduated from Leeds Beckett Univerisity. 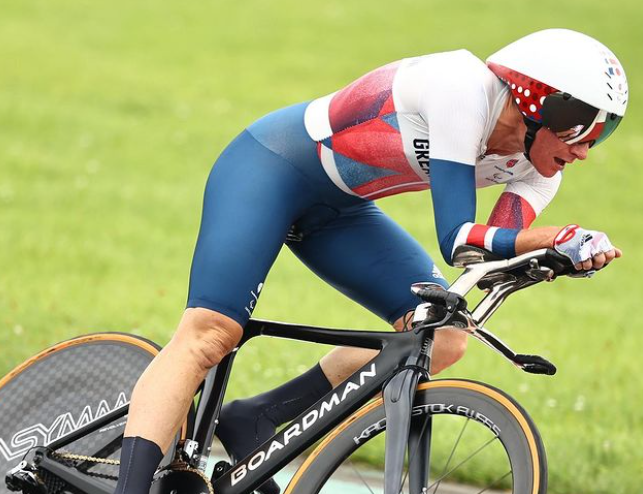 Who is Sarah Storey married to?

Sarah Storey is a married man. In the year 2007, she married a tandem pilot and coach, Barney Storey. She also gave birth to a daughter named Louisa Marie on 30th June 2013 and a son named Charlie on 14th October 2017. She and her husband live in Disley, Cheshire. His sexual orientation is straight. 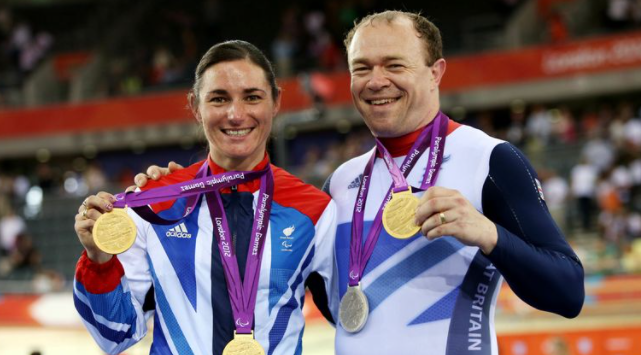 What is the Net Worth of Sarah Storey?

Sarah Storey is a famous gold medalist Paralympic cyclist and former swimmer. As of 2021, the net worth of Sarah Storey is estimated to have $2.5 Million. Her major source of wealth comes from her cyclist career and she is living a luxurious lifestyle as of today. Whereas her exact salary is still to get unfold yet as she has not revealed anything about her earnings.

How tall is Sarah Storey?

Sarah Storey is a very beautiful woman with a charming personality and glowing face attracting a lot of people towards her. She has got a perfect height matching with her body weight. Her exact body measurements such as height, weight, waist size, shoe size and more are still to get unfold yet. Overall, she has got a healthy body as she maintains her body a lot by doing frequent exercise.

Trivias About Sarah Storey You Need To Know.