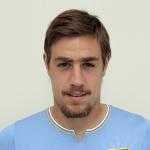 Sebastian Coates one of the well known Uruguayan professional football player who plays for Premeira Liga Sporting Club and the Uruguay national team as a centre back. Currently, he is playing in Sporting club. His shirt number is 4. Uruguayan fans call him Little Lugano.

At the age of 11, Sebastian Coates started his career at club Nacional de football institution of Uruguay. There, he spent 8 years and he was a regular player from his debut in 2009. In Nacional, he played for two seasons and scored eight goals in sixty appearances before joining to English club, Liverpool.

In August, 2011 he agreed on a long term contract with Liverpool. The fee was undisclosed and was around $9 million dollars. On 18th September, he made his debut for this club, Liverpool against the match with Tottenham Hotspur replacing injured Daniel Agger in the minute of 27 with 4-0 defeat. He again scored his first goal for Liverpool against with the Queens Park Rangers on 21st march, 2012. Later he was loaned to the club, Sunderland for 2014-2015 seasons. There, he made his debut against Stoke city at the stadium of Light. Then, he was on a permanent four year deal with Sunderland with undisclosed fee of around £2 million.

Later, he joined to Sporting CP on a loan until the end of the season. On 2nd February 2017, he signed a contract with sporting on a permanent deal.

In 2013, he was married to his wife. They had also a son named Santiago, was born on October 2014. He has not made public about his wife details. His hair color is Hot Tofee. He is also quite close to her mother and he also has close friend, Mauricio Pereyra. He is also an Uruguayan Player. He has height of 1.95 m. The highest recorded fee of Coates is $8.25 Million.