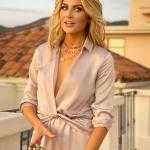 Stephanie Pratt is an American television personality and model. She rose to prominence after being cast in a supporting position in the reality television series, The Hills. The reality series documented the personal and professional lives of Lauren Conrad, Heidi Montag, Audrina Patridge, and Whitney Port. She became the primary cast member in 2010. She has over 863k followers on her Instagram.

The American reality television series, The Hills star, Heidi Montag calls her feud with her co-star and sister-in-law Stephanie Pratt 'heartbreaking'. Heidi married Stephanie's brother, Spencer in November 2008. The 32-years old star on "Make Speidi Famous Again" podcast told, "It's been a really hard week for me. I had a lot of on-'Hills' drama with a family member and that was very challenging and heartbreaking."

The Hills co-star Stephanie said on her Monday "Pratt Cast" podcast that she is not on good terms with Spencer and Heidi. The 32-years old star states, "I do not consider them my family."

Stephanie's brother, Spencer joined The Hills in its second season as Heidi's boyfriend. Stephanie joined the third series of the show in a supporting role.

MTV announced a revival of The Hills entitled The Hills: New Beginnings. It is set to air in June 2019.

What is Stephanie Pratt Famous For?

Where was Stephanie Pratt Born?

Stephanie Pratt was born on 11 April 1986. Her birth name is Stephanie Lynn Pratt. Information about her parents is currently unavailable. Her birth place is in Los Angeles, California in the United States. She holds American nationality. Her zodiac sign is Aries. She has a brother, Spencer Pratt.

She attended Crossroads High School in Santa Monica, California. She later studied at the Fashion Institute of Design and Merchandising.

MTV developed the reality television series The Hills as the spin-off Laguna Beach: The Real Orange County in 2006. It originally chronicled the lives of Lauren Conrad, who appeared on its predecessor, her housemate Heidi Montag, and friends Audrina Patridge and Whitney Port.

Her brother Spencer started dating Montag and moved into an apartment with her. It led to the deterioration of her friendship with Conrad.

She was later cast as a primary member of the reality series, The Hills.

Conrad and Pratt became friends. But her relationship with her brother, Spencer, and Montag deteriorated.

The fourth season emphasizes on her personal life and her past drug abuse.

Conrad left the series after the first half of the fifth season.

She returned as a main cast member in the sixth and final season in The Hills. She talks about her DUI arrest and her sibling rivalry with Spencer. Heidi and Spencer were permanently axed from the series.

She had a special appearance on E4's Made in Chelsea, a British equivalent of The Hills between 2013 and 2017.

She also appeared in its Made in Chelsea: NYC.

She returned with a feature role for the 8th series of Made in Chelsea.

She also appeared in Reality Bites in 2015.

She appeared in Celebs Go Dating in 2016.

She appeared in Drunk History: the UK and Virtually Famous in 2017.

She appeared in a TV movie documentary, The Story of Reality TV in 2018.

She returned to The Hills: New Beginnings in 2019.

She released her memoir, Made in Reality: From the Hills of L.A. to London's Made in Chelsea in 2015. She talked about crystal meth addiction as a teen and struggled with bulimia.

She has been featured in several fashion blogs and magazines such as UK's FHM and US's H and Runway.

She launched her own collection for Goddiva in 2017.

She was arrested in May 2006 for stealing $1,300 worth of clothing from Neiman Marcus. She was charged with second-degree theft. Police also found drugs in her possession while in custody.

She was arrested for DUI in 2009. She was pulled over for tinted windows and she blew a 0.08. She was released after paying $5,000 bail. She was sentenced to three year's probation.

Who is Stephanie Pratt Dating?

She dated Josh Shepherd. They met on the reality-programme. The couple broke up while filming Made In Chelsea LA. She was also romantically linked with actor Gregory Michael in 2010. She briefly dated professional motocross racer, Josh Hansen in 2010. She later dated Julien Chabbott, Jonathan Bennett, and Spencer Matthews.

What are Stephanie Pratt's Body Measurements?

What is Stephanie Pratt's Net Worth?

Stephanie Pratt earned from her television career. She rose to prominence after being cast on the television reality series, The Hills. She also earns from her modeling ventures. She has appeared in several television series. Working in the entertainment industry is her major source of income. Her net worth is estimated at $500,000.