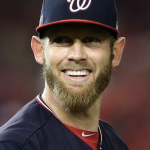 An American professional baseball pitcher is named for Stephen Strasburg. He is currently playing for the Washington Nationals of Major League Baseball (MLB). He was selected by Washington with the first pick in the 2009 Major League Baseball draft. Moreover, he won a World Series with the Nationals in 2019, when he was named the World Series Most Valuable Player (MVP). Overall, he is a very talented player.

It is a question that’s been asked about the Washington Nationals for years now because of its prolific use of deferred money in structuring multi-year player contracts. After the team re-signed World Series MVP Stephen Strasburg earlier this week to what was, briefly, the richest deal ever for a pitcher, it’s come to the fore yet again. Strasburg’s seven-year, $245 million deal works out to $35 million a year just a million dollars less per year than the record-shattering, nine-year, $324 million contracts that Gerrit Cole signed with the New York Yankees Tuesday. (Cole, 29, ostensibly got two more years and $1 million more a year because he’s two years younger, and one could argue, better.) Lerner family, which owns the Nationals, won’t actually be paying the 31-year-old righty nearly as much over the life of his contract. A whopping $80 million, equal to one-third of the contract’s total value, won’t be paid until 2027. And that IOU, which will be paid in three annual installments after the actual contract ends, only accrues interest at a paltry rate of 1% a year. Nationals have locked Strasburg up for $23.6 million a year; a hefty hometown discount to Cole’s $36 million-a-year deal; for the next seven years, based on figures compiled by Cot’s Baseball Contracts.

Who are the parents of Stephen Strasburg?

Stephen Strasburg was born on 20th July 1988 in San Diego, California, the USA as Stephen James Strasburg. He was born to Jim and Kathleen, his parents. He holds American nationality and his ethnicity is White. He is Christian by religion. He had attended West Hills High School based on Santee, California. He had a struggling junior career. However, his high school career was impressive. His outstanding performance against El Capitan High School drew the attention of the scouts towards him. He finished his high school career with varsity letters, set School records in ERA and shutouts, been the 2006 Scholar-Athlete of the Year of his school and was named the second-team all-league. As of 2019, he celebrated his 31st birthday with his friends and family.

For which team, Stephen Strasburg is playing for?

Who is the wife of Stephen Strasburg?

Talking about his marital status, Stephen Strasburg is a married man. He was married to his wife Rachel Lackey on 9th January 2010. They met each other at San Diego State University, where they both used to study. He has been loyal to his wife and has not been any rumor or history of his past affairs except with her. They have no children yet but maybe are planning for some time soon. As of today, they are enjoying their life a lot without any disturbances. His sexual orientation is straight and he is not gay.

What is the net worth of Stephen Strasburg?

The net worth of this famous baseball player is believed to have $60 Million as of 2019 whereas his net worth was believed to have $10 Million as of 2016. His exact salary is under review but there is no doubt in the mind of his followers that he is earning a considerable amount of salary from his present work. Overall, he is satisfied with his earnings without a doubt. With his earnings, he must be living in a luxurious house as well as he is living a lavish lifestyle.

How tall is Stephen Strasburg?

Stephen Strasburg is a very handsome person with perfect height and body weight. He has a tall height of six feet five inches with a balanced body weight of 95 Kg or 209 lbs. His hair color is Brown and eye color is also brown. His other body measurements such as waist size, hip size, chest size and more is still to get revealed yet but it will be added once we get details about it. Overall, he has got a healthy body with a charming smile attracting a lot of people towards him.