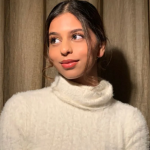 Suhana Khan is an Indian actress, social media celebrity, and model who is best known for being the only daughter of a famous Indian actor, Shah Rukh Khan. He is described as one of the most successful film stars in the world. Suhana made her acting debut in November 2019, in a short film titled "The Grey Part of Blue". She is also studying drama and acting at NYU's Tisch School of the Arts for higher education. She has also served as an assistant director for her father's 2018 film "Zero".

What is Suhana Khan famous for?

Who are Suhana Khan's parents?

Suhana Khan was born on May 22, 2000, in Mumbai, Maharashtra, India. Her birth name is Suhana Khan. She holds Indian nationality. Her ethnicity is Asian while Gemini is her zodiac sign.

Suhana was born as the daughter of Shah Rukh Khan(father) and Gauri Khan(mother). Her father is an Indian actor, film producer, and TV personality who has appeared in more than 80 Bollywood films and earned numerous accolades, including 14 Filmfare Awards. He is also referred to as the "Baadshah of Bollywood", "King of Bollywood", and "King Khan".

Her mother, Gauri is an Indian film producer. She has an elder brother, Aryan Khan, and a younger brother, AbRam Khan. Aryan studied filmmaking at the USC School of Cinematic Arts in California and aspires to become a writer-director. Her father is a Muslim while her mother is a Panjabi Hindu. However, Suhana and her brothers follow both religions, at their home the Qur'an is situated next to the Hindu deities.

She was raised in her hometown, Mumbai where she did her schooling at Dhirubhai Ambani International School. While in high school, she played football and also captained U-14 on her school team. From a young age, she also took dance classes.

Born in a family with an acting background, she expressed her interest in entering the entertainment industry just like her father. So, she is studying drama and acting at NYU's Tisch School of the Arts for higher education in London.

Who is Suhana Khan dating?

Suhana Khan is rumored to be dating Ahaan Pandey. Ahaan is an aspiring actor and social media celebrity who is mostly known for being the nephew of the Bollywood actor, Chunky Pandey. However, neither of them has confirmed their relationship. Also, they are good friends since their childhood. Suhana is also a close friend with actress, Ananya Pandey and actress, Shanaya Kappor. She currently lives with her family in their house, "Mannat" which is located in Mumbai. Besides, she loves to play football. She is also a huge fan of cricket and is often seen supporting her father, SRK's IPL team, Kolkata Knight Riders.

How much is Suhana Khan's worth?

Suhana Khan is sure to be an upcoming Bollywood superstar just like her father, Shah Rukh Khan. She is currently working on several upcoming films. Though she has just started her career, Suhana is living a royal lifestyle with her father's net worth estimated to be between $600 to $700 million as of 2022. With his huge net worth, SRK is the 2nd richest actor in the world.

How tall is Suhana Khan?

Suhana Khan is a gorgeous lady with a well-maintained hourglass body physique in her early 20s. She has a beautiful face with black hair and a pair of brown eyes. She stands tall with a height of 5ft 2inches(1.58m) and has a bodyweight of 42kg(93 lbs). Her body measurement is 34-20-33 inches. Her bra cup size is 34B. She often shares her hot sizzling pictures on her Instagram.

Trivias About Suhana Khan You Need To Know.