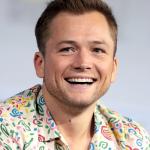 The Golden Globe winner, Taron Egerton is a Welsh actor who has had an interest in the entertainment industry since his childhood. Thus, he began acting at the age of 15 and even got a bachelor's degree in acting. After that, he started struggling in the film industry to establish himself. Luckily, he got a minor role in the British TV series named Lewis. However, the series was canceled after two episodes.

Fortunately, he was cast in Kingsman: The Secret Service which becomes his turning point in the entertainment industry. After that, he started getting roles in other movies and TV series. Some of his notable movies and TV series are The Smoke (2014), Testament of Youth (2014), Robin Hood (2018), The Dark Crystal: Age of Resistance (2019), etc. To know more about him, you should scroll below.

What is Taron Egerton famous for?

Who are Taron Egerton's parents?

Taron Egerton was born in 1989 to his parents. Currently, he is aged 32 years old. His mother Christine Egerton worked in social services while his father David Egerton ran a bed and breakfast business near Liverpool. He was born in Birkenhead, Merseyside, England. Because his parents were divorced when he was two and he was raised by his mother alone in the Welsh island of Anglesey. Similarly, he holds Welsh nationality and belongs to the White ethnicity. His zodiac sign is Scorpio and follows Christianity.

For education, he went to primary school. He then joined Ysgol Penglais School in Aberystwyth. Later, he enrolled at the Royal Academy of Dramatic Art in London where he graduated with a degree in Acting in 2012.

What movie is Taron Egerton filming?

Who is Taron Egerton in a relationship with?

Taron Egerton is not married yet. However, once he has a romantic relationship with the British producer Emily Thomas. The lovebirds first met in 2016 and started dating each other. After dating for almost 2 years, the lovebirds quit their relationships in 2018. The reason behind their separation is yet to be disclosed. Currently, he seems to be single and enjoying his love life happily. Also, he is focussing his career quite seriously at present.

How rich is Taron Egerton?

Taron Egerton has been engaged in the entertainment industry since 2012. During his career, he has worked in many awards-winning blockbuster movies. Thus, he should have earned the sum of an impressive amount of money throughout his career. Based on some online sites, his current estimated net worth is said to be $10 million. However, his salary and his other financial details are yet to be disclosed.

How height is Taron Egerton?

Taron Egerton has an athletic body with a 42 inches chest, 32 inches waist, and 16 inches biceps. He has a pair of hazel green eyes and dark brown hair color. Similarly, he has a height of 5 feet 10 inches and he weighs around 75 Kg. Overall, he has good health and has an attractive body build.

Trivias About Taron Egerton You Need To Know.