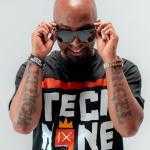 Aaron Dontez Yates, popular by the name Tech N9ne is an American rapper, singer, songwriter, record producer, actor, and entrepreneur. His stage name Tech N9ne was given to him by rapper Black Walt due to his fast-rhyming Chopper style and was originated from the TEC-9 semi-automatic handgun. He later added a deep meaning to his name, claiming that it stands for the complete technique of rhyme with "tech" and "nine" representing the number of completion. He has sold over two million albums. His music is featured in numerous films, television, and video games. He won the Left Field Woodie award at the mtvU Woodie Awards in 2009.

Tech N9ne Clarifies He Is Alive Following The Death Of Fellow Rapper Of The Same Name, Tech 9

Tech N9ne was born on 8 November 1971. His birth name is Aaron Dontez Yates. He was born to a father, Carlton Cook and a mother, Maude Sue Yates-Kalifah. His birth place is in Kansas City, Missouri in the United States. He holds American nationality. His zodiac sign is Scorpio. He has a sister, Basimah Khalifah. He began rapping at a very early age. His mother suffered from epilepsy and lupus when he was a child. it emotionally affected him and inspired him to "search for God". He used to explore abandoned buildings with his best friend hoping to catch a "ghost" and film it.

He was a member of the group, Black Mafia. The group was formed in 1991.

He then joined the group 57th Street Rogue Dog Villians. Their single, "Let's Get Fucked Up" earned the group success.

He signed with Perspective Records in 1993. He was a member of the group Nnutthowze. The label released them and their group disbanded.

He signed with Qwest Records but moved to JCOR Records.

He was featured on the soundtrack form the film Gang Related in 1998.

He was one of the several artists featured on the song "The Anthem" in 1999.

He partnered with Travis O'Guin to find a record label, Strange Music in 1999.

He released his debut album, The Calm Before the Storm in 1999.

He released his second studio album, The Worst in 2000.

He released his studio album, Angelic on JCOR Records in 2001.

He then released Absolute Power in a joint venture between Strange Music and M.S.C. Music & Entertainment.

He released the album, Everready (The Religion) in 2006.

He has released 12 studio albums till date.

He released his first mixtape Bad Season in December 2010.

He was featured on the song "Interlude", Lil Wayne's song from his ninth studio album The Carter IV.

He earned his first platinum record in 18 years in June 2017 for Caribou Lou.

His songs are featured in several films including, Born 2 Race, Gang Related, Alpha Dog, Our Heroes: The 25 Best Black Sports Movies (Ever), and The Life of Lucky Cucumber.

His song "Let's Go" was used in an online promotional short film for AXE body spray in 2009.

He has appeared as an actor in the films, Vengeance, and Night of the Living Dead: Origins 3D.

He starred in the musical "Alleluie: The Devil's Carnival" in 2015.

He released "Shine" for the Jaco Pastorius documentary, Jaco in 2015.

He and label mate Krizz Kaliko appeared in a promotional video for the Fight Night Round 4 video game in 2009.

His music was featured on the television shows including Dark Angel, I'm From Rolling Stone, My Super Sweet 16, The Hills, Spike Guys' Choice Awards, and Warren The Ape.

His song "Earthquake" was featured on an episode of MTV's America's Best Dance Crew in 2008.

He appeared in 3 episodes on the MTV game show, Hip Hop Squares in 2012.

He has appeared and performed on Jimmy Kimmel Live! in 2014.

He appeared on Wild n Out as captain of the Black Team in 2014.

His song "Give It All" from the album Special Effects was used during Inside the NBA's "Tip-Off" for Game 4 of the Eastern Conference Finals in May 2015.

Is Tech N9ne Married Or Single?

Tech N9ne is unmarried at present. Previously, he was married to Lecoya LeJeune. The two tied a knot to each other in 1995. 10 years later, they got separated in 2005. He filed for divorce in 2015 and their divorce was finalized in 2017. They were already separated for 12 years before their divorce was finalized. He has a daughter named Reign with his ex-wife. He also has two children, Alyia, a daughter, and Dontez Yates, a son from another relationship. The identity of their mother is not revealed yet. No other information regarding his personal life is available at present.

What are Tech N9ne's Body Measurements?

What is Tech N9ne's Net Worth?

Music is Tech N9ne's major source of income. He has earned most of his fortune working in the music industry. He has also worked in films and television. He has endorsed several brands. He teamed with Boulevard Brewing Company to create a new beer named Bou Lou in May 2018.  The beer was named Bou Lou in a reference to his song "Caribou Lou". He has appeared in a TV ad for F.T.I. He narrated a Super Bowl commercial for Sporting KC in 2016. As of 2019, his net worth is estimated at $16 million.