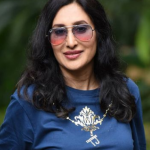 Teejay Sidhu is an Indian actress and producer who debuted her acting career in 2004. Since then, she was active in the entertainment industry and appeared in several movies and TV series to date. She came limelight after she appeared in the reality shows like Khatron Ke Khiladi 5 (2014) and Biss Boss (2018) with her husband. Besides that, she is also a radio jockey in Radio One. To know more about her, you should read the below article.

What is Teejay Sidhu famous for?

Where is Teejay Sidhu from?

Teejay Sidhu was born in 1980 to her parents. Currently, she is aged 42 years old and her birthplace is Sagarpur, Punjab, India. Her parents are Kewal Sigh Sidhu and Surinder Sidhu. However, her parents' professional details are yet to be disclosed. Later, her parents moved to Vancouver in Canada while she was young. Also, she has two siblings. They are Ricky Sidhu and Devinder Sidhu. Similarly, she holds dual nationality i.e. Indian and Canadian. She belongs to the South-Asian ethnicity. Her birth sign is Aquarius and follows Sikhism.

For education, she went to a local high school and then attended the British Columbia Institute of Technology in Vancouver, Canada. Later, she was graduated with a degree in Broadcast Communications.

Who is Teejay Sidhu's husband?

Teejay Sidhu was happily married to the actor Karavir Bohra. The information about their dating is yet to be public. They exchanged their wedding vows in 2006 at the Sri Ravishankar Ashram, Bengaluru. Together, the couple blessed twin daughters on October 19, 2016. Their names are Vienna Bohra and Raya Bella Bohra. Four years later, the couple again blessed a daughter named Gia Vanessa Snow Bohra on December 20, 2020. Currently, the couple lives blissful life with their children.

How much does Teejay Sidhu earn?

Teejay Sidhu has been engaged in the entertainment industry since 2004. She has appeared in several TV series to date. Thus, she probably has earned an impressive amount of money from her career. Based on some online sites, her current estimated net worth is said to be $1 million. However, her salary and other financial details are yet to be disclosed.

How tall is Teejay Sidhu?

Teejay Sidhu has a slim body with a body measurement of 28-26-32 inches. Similarly, she has an angular face with a pair of beautiful brown eyes and black hair color. She used to wear 8.5 (U)S shoe size and 6 (US) dress sizes. Further, she has a height of 5 feet 6 inches and she weighs around 54 Kg. Overall, she has a fit and healthy body.