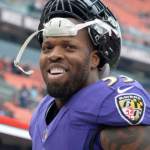 Terrell Suggs has been a prominent figure in the Baltimore Ravens lineup. The linebacker has been making a wonderful impact since the inception of his professional career. Besides leading the team to clinch the Super Bowl XLVII in 2012; He is a seven-time Pro Bowl selection. He won the league's best defender award in 2011 and has been named All-Pro twice. Learn more about the linebacker through this article.

What is Terrell Suggs famous for?

Where was Terrell Suggs born?

Recalling his early life, Terrell Suggs was born in Minneapolis, Minnesota, the USA. His nationality is American and ethnicity is Afro-American. He is the son of Laverne Diane and Donald Lee Suggs.

Growing up, he was interested in and played football. He has four siblings, Donald Suggs Jr., Monquielh Suggs, Hermann Suggs, and Jonquie Suggs. Further, his birth sign is Libra.

What college did Terrell Suggs attend?

Concerning his education history, Suggs attended Chandler High School, before moving to Hamilton High School, where he played for the school’s football team. After that, he went to Arizona State University.

When did Terrell Suggs pursue his football career?

Is Terrelle Suggs married or not?

Reflecting on his personal life, Suggs is a married man but divorced at present. He was married to Candace Williams on December 14th, 2012. The couple has two children together. However, the couples have become known for domestic abuse cases, both before and after their marriage. Hence, the couple is no more together and have separated in 2015.

Besides, we have no idea if Terrel is in a relationship after the divorce. Also, he is not so active in social media, which is the main reason why we couldn't find any information about his current relationship status. However, he might be busy in his professional career and doesn't want to get involved in a relationship because of his bad experience.

How much is Terrell Suggs worth?

Being a part of the sports industry, Suggs earns the sum of a good amount of money and fame through his profession as a footballer. Based on some online reports, his estimated net worth said to $22 million at present. However, his base salary is somewhere around $4 million. Also, he has collected $105,210,000 as career earnings, playing 16 seasons in NFL.

How tall is Terrell Suggs?

Observing his body statistics, Suggs stands a height of 6 feet 3 inches and weighs around 120 Kg. He has an athletic body with a pair of black eyes. Further, he has not a hair on her head. His other body information is yet to be disclosed. In the case of disclosed, we will let you know.