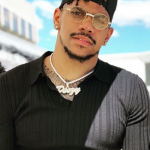 Terrelle Pryor is a professional football player who is currently a free agent. Besides, Terrelle is considered as the most recruited high school football-basketball athlete in southwestern Pennsylvania since Tom Clements. Likewise,  Terrelle was also honored by the 2007 Hall Trophy (U.S. Army Player of the Year). Let's know more about the player through this article.

What is Terrelle Pryor famous for?

Where is Terrelle Pryor born?

Recalling his early life, Terrelle Pryor was born in Jeannette, Pennsylvania as Terrelle Pryor Sr. Besides, he holds American nationality and is of mixed ethnicity. As of 2019, he is 30 years old. Unfortunately, there is no information about his parents on the Internet.

Furthermore, Terrelle is a graduate of Ohio State University. Before that, he completed his high school from Jeannette High School, in Jeannette, Pennsylvania.

When did Terrelle Pryor begin to play as a footballer?

Is Terelle married or not?

Reflecting on his personal life, the reality seems to be confusing when it comes to his personal life. Some of his fans think he is dating West Virginia Basketball Player Chania Ray, while it is also known that Terrelle Pryor is having an affair with his long-time girlfriend Heaven Lei Bobo and that in 2014 he also became a parent to a sweet child, a son Terrelle Stephen Pryor II. Unfortunately, very little is known about his personal life as he always tries to maintain a low key. Nevertheless, his social media presents a different scenario.

He often flaunts the pictures of his girlfriends on his social media and fans get an idea about who his girlfriend is. As per his Instagram story he is currently living with his son and Heaven.

However, it is known that he cheated on Chania with Heaven and the two pretty girls are having a conflict on the internet. Let's see who will win their sweetheart, Terrelle. The news came out in the year 2018. It seems that Terrelle was having multi relationships till 2018 and after that his first girlfriend Chania found out his truth.

What is Terrelle Pryor's net worth?

Being a part of the sports industry, Terrelle earns the sum of a good amount of money and fame through his profession as a footballer. Base on online reports, his estimated net worth said to be $8 million at present while his salary is $930 Thousand annually. Besides, during his 8 seasons career in the NFL, he made total career earnings of $15.02 million.

Further, He owns 2 MERCEDES-BENZ PICKUP TRUCK, one in white color and other in black. Besides, he also has a Mercedes-Benz E-Class whose price starts from $53,000 to $109,000.

How tall is Terrelle Pryor?

Observing his body statistics, Terrelle stands a height of 6 feet 4 inches and weighs around 103 Kg. He has an athletic body build with brown eyes and black hair color. His other body statistics are yet to be disclosed.

Trivias About Terrelle Pryor You Need To Know.