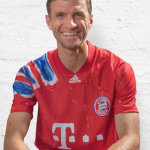 Thomas Muller is a German professional footballer who plays for Bundesliga club Bayern Munich and the Germany national team. His playing position is a midfielder or forward and has been deployed in a variety of attacking roles – as an attacking midfielder, second striker, center-forward, on either wing, and even as a central midfielder. He is also widely regarded as one of the best off-the-ball players of all time due to his immaculate positional awareness. He holds the record for the most assists given in the Bundesliga, with 152 assists. At the age of 10, he performed for TSV Pahl, a youth club in Germany. In 2008, Thomas had his debut for the reserve team of Bayern Munich in a Regionalliga match against SpVgg Unterhaching in which he scored a goal. He debuted for the first team of Bayern Munich on August 15, 2008, in a Bundesliga match against Hamburger SV. In February 2009, Müller signed a two-year contract with Bayern Munich. After signing for Bayern Munich, Thomas thought that he would be transferred or loaned to another team, but he remained in the same team and was in the squad led by Louis van Gaal. Thomas played his first Champions League match for Bayern Munich on March 10, 2009, against Sporting CP. In February 2010, Muller extended his deal with Bayern until 2013. He won the Golden Boot and the Best Young Player Award at the 2010 FIFA World Cup. Muller first performed for the U-21 German team in a friendly matchup against Turkey. He debuted for the senior national team of Germany in a friendly game, a 1-0 loss to Argentina. He first appeared in a documentary film called The Team in 2014. Other than football matches, Muller has appeared in the TV series Das Aktuelle Sportstudio (2010-2011) as himself. In 2014, he was ranked the fifth-best footballer in the world by The Guardian. He is the most decorated German footballer in history, with 32 trophies.

What is Thomas Muller Famous For?

What is Thomas Muller's Nationality?

Thomas Muller was born on September 13, 1989, in Weilheim in Oberbayern, Germany. He was born to parents; Klaudia Müller and Gerhard Müller. His nationality is German and his ethnicity is German-White. He grew up with Simon Müller (Younger Brother). He became interested in the world of football in his childhood years and played as a youth for TSV Pähl. He went to a grammar school. His present age is 32 as of 2022.

Who is Thomas Muller's Wife?

Thomas Muller is a married man. He is married to his long-time girlfriend Lisa Trede. Lisa Trede is a semi-professional equestrian who works on a farm. The pair married on December 1, 2009, after being engaged for two years. The pair do not have children in this relationship to date. His sexual orientation is straight. 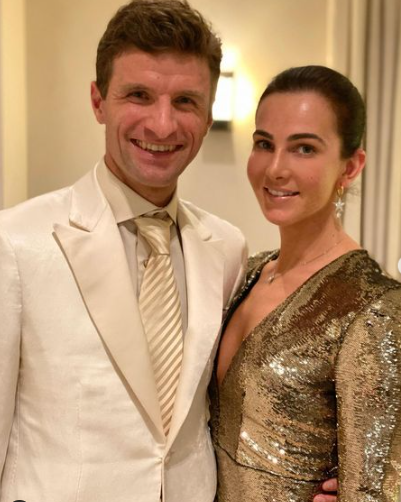 What is Thomas Muller's Net Worth?

Thomas Muller is a successful footballer who has made a huge fortune from his football career which is his main source of wealth. As of 2022, the net worth of Thomas Muller is estimated to have $55 Million. He has been sponsored by Adidas, Volkswagen, Rewe, and Barilla. He has also appeared in a TV advert for Weber Stephen Grill, Gillette, and BiFi. He is also known as the advertising king of Germany. He has a salary worth $373K weekly with Bayern Munich which makes his annual salary around $19.4 million. He is living a lavish lifestyle. He has a transfer value worth $27.7 million in the current transfer market. He has a huge collection of cars including Audi, BMW, Rolls Royce, and many others.

How tall is Thomas Muller?