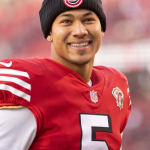 Trey Lance is an American footballer who is currently playing for the San Francisco 49ers of the National Football League (NFL). His playing position is quarterback. He played college football at North Dakota State, where he received the Walter Payton and Jerry Rice Awards as a freshman en route to winning the 2020 NCAA Division I Football Championship Game. Selected third overall by the 49ers in the 2021 NFL Draft, he spent most of his rookie season as a backup before becoming the starter in his second year. The only full game of his 2022 season was the opener against the Chicago Bears, which saw him complete 13 of 28 passes for 164 yards and an interception in a 19–10 loss.

Where does Trey Lance come from?

Trey Lance was born on May 9, 2000. He comes from Marshall, Minnesota. He is American by nationality and his ethnicity is Mixed. His present age is 22 as of 2022. He was trained mainly by his father, Carlton, a former cornerback for the Saskatchewan Roughriders of the Canadian Football League and the London Monarchs of the World League of American Football. His mother's name is Angie Lance. His parents met for the first time at SMSU. His younger brother Bryce plays wide receiver at North Dakota State. He is a Christian and was a leader of his local Fellowship of Christian Athletes chapter in high school. He played running back in youth football and first played quarterback in middle school. He attended Marshall High School, where he was viewed as the best quarterback prospect in Minnesota. He committed to North Dakota State in December 2017. He was redshirted for the 2018 season but played in two games. He was named the starter in 2019 and led the Bison to the 2020 NCAA Division I Football Championship Game and was named the MVP in the 28–20 victory. He finished the season completing 192 of 287 passes for 2,786 yards, 28 touchdowns, and no interceptions, an NCAA record for most passing attempts in a season without an interception. Additionally, he ran 169 times for 1,100 yards and 14 touchdowns. He was set to start again in 2020 before the season was postponed due to the COVID-19 pandemic. During his 2020 season, he only played against Central Arkansas in October 2020.

How was the Career of Trey Lance?

Who is Trey Lance's Girlfriend?

When it comes to his marital status, Trey Lance is unmarried. Currently, he is dating volleyball player Brynn Chandler. Lance and Brynn Chandler appeared on social media together. Their relationship was confirmed on July 8th of last year when Chander posted a photo of the couple on her Instagram. Lance and Chandler have rarely spoken at length about their relationship. Chandler is still enrolled at the University of Georgia. Not only is she finishing her Communications Studies major, but she is also the star player of the Bulldogs volleyball team. Today, the couple is enjoying their present life a lot. His sexual orientaiton is straight and he is not gay. 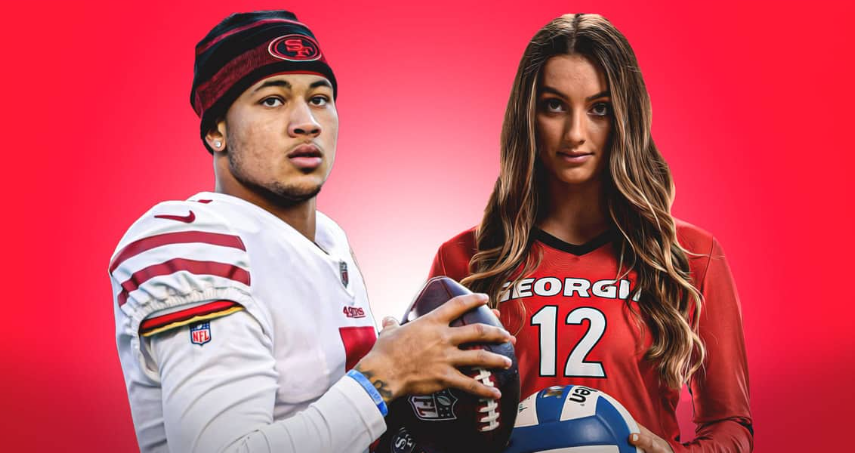 Previously, he was linked with Liv Cowherd, the daughter of FOX Sports host Colin Cowherd. However, that rumor was completely squashed in July of 2021.

What is Trey Lance's Net Worth?

Trey Lance is a young and talented American footballer. The net worth of Trey Lance is estimated to have $10 Million with his endorsement deals combined with his NFL salary to form such a calculation as of 2022. He signed a four-year deal with the San Francisco 49ers. He signed his four-year rookie contract, worth $34.1 million, on July 28, 2021. In his rookie year of 2021, Lance received a base salary of just 600,000 dollars for the entire season, although his guaranteed money manifested itself in a signing bonus worth upwards of 5 Million dollars. His current endorsement agreements include deals with Chipotle, Bose, Old Spice, and Cantu Beauty. With this responsibility comes inevitable financial gain, with sponsorship deals likely to bolster Lance's net worth, however, this will also be paid on top of an incredibly high rookie salary after being taken so high up in the NFL Draft. He is making his annual salary of $8,526,319 from his current team. His main source of wealth comes from his football career and he is living a lavish lifestyle at present.

Trey Lance is a handsome footballer with a height of 6 ft 4 in (1.93 m). His body weight consists of 224 lb (102 kg). He is a fitness freak and he maintains his body weight a lot. His body type is athletic. He has curly black hair with brown eyes. He has a charming smile attracting a lot of fans towards him. He has inked a lot of tattoos on his body as well.

Trivias About Trey Lance You Need To Know.